Selma Dabbagh (1970– ) is a British Palestinian writer currently based in London, but whose fiction is mainly – though not always – set in the contemporary Middle East. As for much twenty-first-century Palestinian literature and culture, her writing is often concerned by issues of place and geography, by the ways in which history is bound to and intertwined with the land, and how colonisation and displacement have affected and continue to affect (post)colonial populations.

[…] her writing is often concerned by issues of place and geography, by the ways in which history is bound to and intertwined with the land, and how colonisation and displacement have affected and continue to affect (post)colonial populations.

Her first novel, Out of It, was published by Bloomsbury in 2011, first in English though it was later translated into Arabic by Khulood Amr under the title Gaze Tahta Al-Jild (Gaza Under The Skin) in 2015, as well as into French and Italian in 2016. Dabbagh is also the author of a number of short stories which have been published in magazines and journals as diverse as Wasafiri, Saqi and Telegram, as well as a number of anthologies including Granta and International PEN. As this latter publication might indicate, she has for a long time worked closely with PEN International, a global organisation of writers and activists who are committed to the power of literature as a peace-building force able to create mutual understanding between different cultures and nations across the world. Her written work often engages with issues such as these, exploring the permeable lines and moments of friction between culture and resistance, literature and activism – even as Dabbagh herself practises both. 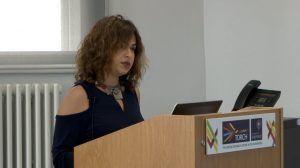 In addition to her prose fiction, Dabbagh has also written drama, including a celebrated radio play that was produced by BBC Radio 4, broadcast in January 2014, entitled The Brick. The play dramatises the day-to-day experience of Palestinian life by telling the story of a Palestinian woman attempting to travel through contemporary Jerusalem, shaped as it is by numerous permits, road blocks and checkpoints, whilst countering these with the Palestinian’s rich cultural heritage and deep familial roots. Dabbagh also regularly writes reviews and short articles for important Palestinian online publications such as Electronic Intifada, and has contributed blogs and other journalistic pieces for The Guardian and the London Review of Books. She regularly appears at international literary festivals in Britain and Palestine, as well as other places across the world, where she reads from her work; she has also on occasion taught creative writing workshops in schools and universities.

‘Last Assignment to Jenin’ and ‘Take Me There’, in Things I Would Tell you: British Women Write, ed. Sabrina Mahfouz (2017)

‘That Woman Stole My Jewellery and Other Thoughts’, in The City and The Writer, ed. Nathalie Handal (2016)

‘The Body of the Father of Daoud’, in Beautiful Resistance: A Special Issue on Palestine, Wasafiri, ed. Rachel Holmes (Winter, 2014)

‘Down the Market’, in Granta’s New Writing 15: The Anthology of New Writing Volume 15, ed. Bernardine Evaristo and Maggie Gee (2007)

‘Beirut-Paris-Beirut’, in Mountains of Mars and Other Stories (2005)

‘Aubergine’, in Spoonface and Other Stories (2004)