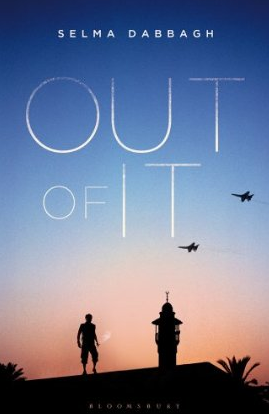 Selma Dabbagh’s Out of It

As for much of Dabbagh’s writing, Out of It is a powerfully spatial text – the title raises issues of geography and place, of no longer being present in a specific location. But it also connotes a more conversational meaning of feeling tired, exhausted or perhaps bewildered; or maybe, and related to its initial geographic suggestion, socially excluded. Through its detailing of the lives of its two protagonists, twin brother and sister Rashid and Iman, the novel offers insight into what it is to be both British and Palestinian, whether that is to hold simultaneously those two national identities at once, or to choose one over the other, and to think through the relationship between the two very different geographical areas of Britain and Palestine to which those respective identities are tied.

The novel is split into five parts, the titles of which orient the different sections around specific geographic areas: ‘Gazan Skies’, ‘London Views’, ‘Gulf Interiors’, ‘London Crowds’ and ‘The Gazan Sea’. These sections are organised so as to sandwich London, the metropolitan capital and Dabbagh’s current home, between the more overtly violent topographies of Gaza. It is this juxtaposition that, combined with the movement of the Rashid and Iman as they traverse these two geographical zones, forces a contrast between these two places, generating a productive friction that drives one of the overarching sociopolitical points of Dabbagh’s ambitious first novel. A difficulty faced by any ‘postcolonial’ novelist, especially when writing in English for a global market (Out of It has been published in London, New Delhi, New York and Sydney – but not Gaza), is the danger of commodifying the alien environment and its peoples for the still implicitly hierarchical and privileged readerships in the Global North. But Dabbagh frames her representation of Gaza within a different referential paradigm, designed both to initiate this Western readership into the immediacy of Palestinian everyday life, whilst simultaneously deconstructing, in the tradition founded by Palestinian academic Edward Said, the Orientalist stereotypes and assumptions that those readers might bring to it.

Through her superimposition of the terror and violence of the streets of Gaza onto the more mundane geographies of London’s cityscape, Dabbagh is not only engaged in a project of anti-Orientalist deconstruction. The novel’s topographical overlaying also works productively to initiate a sense of cross-border political responsibility between the two geographical spaces that Dabbagh herself, and her novel’s characters, inhabit. As an unidentified narratorial voice comments, at the climax of a powerful central chapter that is just two pages in length:

The chatterers that filled the streets [of London] became complicit with each missile that blasted the town [in Gaza], each sheet-wrapped body thrown into a mass grave, each screaming child outside a demolished home. (p.186)

That I have to insert the place-names here simply to make the quotation clear to the reader demonstrates the geographical slippage at work throughout the novel. It is through this contrasting process that Out of It forces, indeed forges, a connection between the banality of the apparently depoliticized everyday life of London’s citizens and the violent horrors faced by the population of Gaza. This connection is not rooted in an historically informed guilt, though of course this would be legitimate. Instead, Dabbagh works these processes out through the distinctly personal prism of Rashid and Iman, drawing on the movement between individual stories and collective responsibilities in a way that only the extended narrative explorations of the novel form allow. What results is a complex and fascinating critique of those who ignore the injustice of the Palestinian/Israeli conflict, alongside a deconstruction and reevaluation of notoriously vehement non-Palestinian activists who have taken up the cause only to assuage the fissure in their liberal consciousness.

Whilst unpicking these pre-existing social nuances, Dabbagh’s first novel also offers some refreshingly original perspectives. Though engaged in a careful project of politicization, perhaps most importantly she also tries to absolve her Palestinian characters of their political responsibility. Rashid and Iman struggle with conflicting threads of obligation towards, and rejection of, the Palestinian cause as a defining aspect of both their lives and identities. Dabbagh’s exploration of these multiple dimensions of Palestinian life reclaims the realm of the private: those arenas of individual and family life that are not defined by political circumstance, so taken for granted in a country like Britain, so rare and difficult to come by in Palestine. After all, nestled at the heart of those geographically-oriented sections, and of the novel as a whole, is ‘Gulf Interiors’. It is through its evocation of these personal interiors, displaced spatially and symbolically onto domestic interiors – those parts of the city and of people’s lives not seen from the street, and unrepresented in media coverage of Gaza and the West Bank – that the novel is able to deconstruct stereotypes and assumptions that have been attached to Palestine in the Global North. Nevertheless, it does so whilst always demanding a new engagement with the politics of dispossession and occupation that continue to be defining features of the Palestinian experience on both individual and global levels.