Teju Cole – author, critic, and photographer – was born in 1975 in Kalamazoo, Michigan to Nigerian parents, and raised in Lagos. At the age of 17, he returned to Michigan to study medicine, later studying African Art at SOAS, London and Art History at Columbia, New York. His first novel, Every Day Is for the Thief, was published in Nigeria in 2007, adapted from a series of blogposts and photos from a trip to Lagos. He came to international prominence with Open City (2011), a second novel testing the boundaries between fiction, non-fiction, essay, and autobiography. Cole has written widely and experimentally as a critic and essayist and is the New York Times’ photography columnist. Many of his essays were collected in Known and Strange Things (2016). In 2017 he published a photo-and-text book, Blind Spot. He lives and works in Brooklyn, but his peripatetic lifestyle and artistic approach continues to shape his practice.

[T]he world belongs to Cole and is thornily and gloriously allied with his curiosity and his personhood. 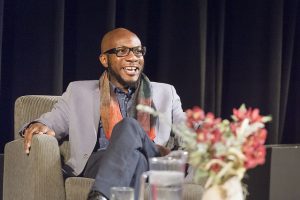 Teju Cole is a Nigerian-American by origin, but as a writer he eschews exclusive definition by national labels such as Black British or African American, which have been the cornerstones of Anglophone and postcolonial writers before him, in favour of a defiant and provocative global identity. Cole’s work experiments with genre and form, blending fiction and non-fiction and indeed a range of media beyond writing (photography, sound, social media, and more). At his disposal in these border-crossing curatorial works is the full canon of global literature and culture, including, significantly, writing of British origin and with colonial and diasporic preoccupations.

Claiming access to the breadth of interests and influences that he does, Cole draws a distinction between himself and many other writers of the postcolonial (including Nigerian) diaspora, as articulated in an essay on James Baldwin:

He was sensitive to what was great in world art, and sensitive to his own sense of exclusion from it. […] I disagree not with his particular sorrow but with the self-abnegation that pinned him to it. Bach, so profoundly human, is my heritage. I am not an interloper.

Cole therefore demands subtle and diverse contextualisation, and to read him in relation to a tradition of British migrant and postcolonial writing adds resonance both to that body of work and to Cole’s oeuvre.  His British influences are significant. John Berger, for example, is a palpable and frequently acknowledged force in Cole’s essays, his photo-text work in particular. Cole built a strong friendship with Berger, unburdened by the kinds of historical or racial anxieties Baldwin suffered, and distinct too (though we can’t forget the role of personality in such interactions) from the more fraught relationship he describes with his postcolonial predecessor V. S. Naipaul. The writer to whom Cole is perhaps most often compared is W. G. Sebald, a German author whose immense significance to British writing suggests a template for the kind of relation a writer like Cole could take in turn. Their writing comes alive through the kinds of cultural transpositions that preoccupy them.

Bruce Chatwin (a key influence of Sebald’s) reinvigorated British travel writing in 1979 with In Patagonia, and Cole in turn has adopted the curatorial and polymathic travel writing style Chatwin famously established in that book. In Chatwin’s case it has been associated specifically with his heightened Englishness; for Cole to take such a role and to interact in polyphonic ways with the British canon is a political statement itself, an enactment of the kind of interactive transnational and postcolonial world to which he looks forward.