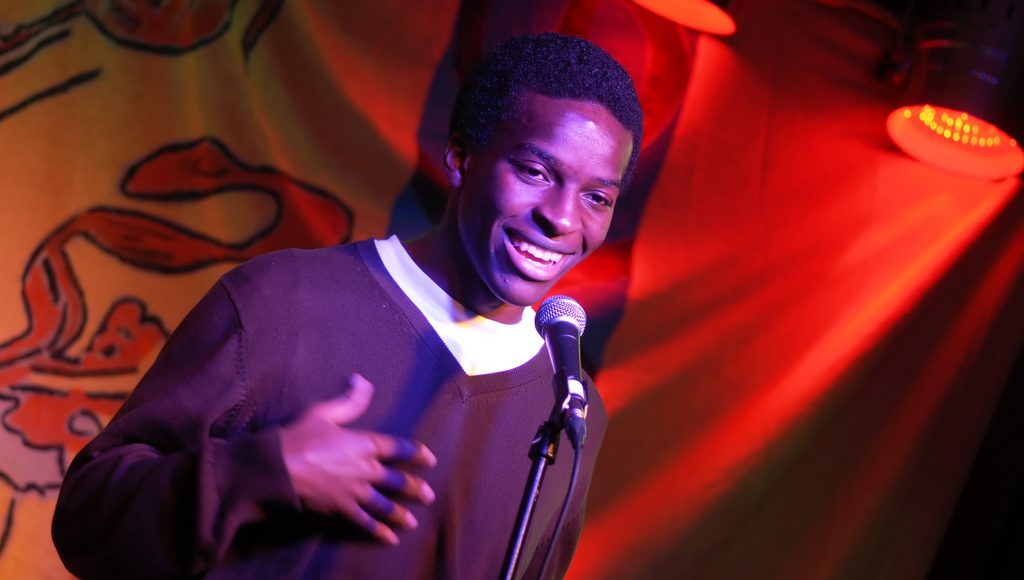 Soft spoken and charming in person, Kayo Chingonyi raises his voice and his political verve in performance. Born in Zambia in 1987, Chingonyi moved to the UK at age six and grew up in Newcastle and London. He has held poetry residencies with five institutions and received the Geoffery Dearmer Prize in 2012 for his poem ‘calling a spade a spade’. In the same year he released his first pamphlet, Some Bright Elegance (Salt). His second pamphlet The Colour of James Brown’s Scream (2016) was published by Akashic and in the summer of 2017 his first full collection Kumukanda was released by Chatto & Windus, an imprint of Penguin Random House. Kumukanda, meaning initiation, has been critically acclaimed.

Kayo Chingonyi’s vision places an intimate, edgy sense of the individual experience – uncertain, intuitively resistant to easy-reach categorisations […] – dynamically and responsively in the pathway of historical developments in colour politics.

Warsan Shire has described Chingonyi’s debut collection Kumukanda (Chatto & Windus, 2017) as a “brilliant debut – a tender, nostalgic and at times darkly hilarious exploration of black boyhood, masculinity and grief”. Much of Chingonyi’s work plays on these themes; weaving loss, masculinity, black identity and maturity into music, traditional poetic styles and spoken word. Chingonyi’s styles and modes of dissemination mirror a thematic concern that weaves through most of his publications, that of being ‘between worlds’. Referencing a cricket test match and rap music videos, Chingonyi highlights racial politics in high school sport and classrooms in ‘calling a spade a spade’ – writing:

Raised as I was, some words in this argot catch
in the throat, seemingly made for someone else
(the sticking point from which all else is fixed).

Here the in-between space is a catch in the throat, elsewhere, a border, or a heritage lost in diaspora.

His first pamphlet was received, in Natalie Teitler’s words, as a ‘beautifully structured, almost traditional work which fits well into the traditional British Canon. Closer reading, however, reveals a complex and sometimes subversive approach’. His more recent work is concerned with resistance – ‘the resistance to being defined’, as Kate Kellaway puts it. Placing his work both within and outside of the canon, these critics highlight the spaces that Chingonyi’s poetry brings into concert and the rising interest by British poets in navigating the borders between literary and performance genres. As an emcee and DJ his work reflects the influences of jazz, hip hop and RnB and his style infuses melancholic music with the clever rhythm and internal rhyme for which his poetry is known.