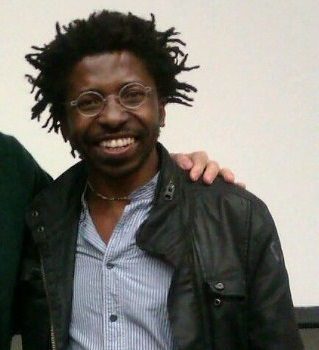 Brian Chikwava (1972– ) is a Zimbabwean writer, journalist, and musician currently living and working in London. He is the author of the Caine Prize-winning short story ‘Seventh Street Alchemy’ (2003), and the Orwell Prize-shortlisted novel Harare North (2009). Born in Victoria Falls, Chikwava graduated from the National University of Science and Technology in Bulawayo in 1996, before moving to Bristol, UK, to study Civil Engineering. Citing a lack of the technical knowledge required to express himself architecturally, Chikwava found a creative outlet in writing short stories. Since graduating from Bristol in 2000, he has worked as an editor and a lecturer while writing his fiction, and currently writes for Wasafiri. He lives in Crystal Palace, London.

Due to the fact I am not quite confident in the world that is already there and constructed, I tend to find it easier to creatively articulate the experience of people that are on the margins.

As the title Harare North – the Zimbabwean colloquialism for London – would suggest, Chikwava’s writing speaks both to the condition of being African and globally displaced, and that of being a Black Zimbabwean writer located in Britain. Reading Chikwava’s work recreates the amusement, bewilderment, and pain felt by people who, due to hostile immigration policies or Kafkaesque state bureaucracy, are not merely forced to live on the peripheries of society, but do not officially exist within it. Since the publication of ‘Seventh Street Alchemy’ in 2003, Chikwava has predominantly written short fiction such as ‘ZESA Moto Muzhinji’ published by Weaver Press in Harare in 2005, and ‘Dancing to the Jazz Goblin & His Rhythm’ published in The Literary Magazine in London, also in 2005. Yet, his writing of short stories may be due to concrete necessity rather than creative impulse. ‘We live in these times where everyone is short of time – time poverty is an all-pervading condition.’ His best-known work is the acclaimed 2009 novel, Harare North.

‘Due to the fact I am not quite confident in the world that is already there and constructed, I tend to find it easier to creatively articulate the experience of people that are on the margins,’ says Chikwava. What all of his fiction demonstrates, though, is how marginality is becoming an increasingly prevalent experience for people across the world. While his short stories show the difficulty of lives lived unofficially in Zimbabwe, Harare North reveals the margins that many middle-class readers didn’t realise existed within British society. Chikwava shows how life for the undocumented migrant labourer in Brixton can feel as hard as life for someone without an official birth certificate in Harare.