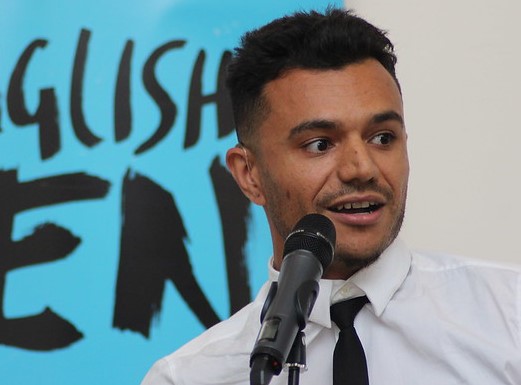 A Londoner born in a British-Jamaican home in 1986, Raymond Antrobus started out as a teacher and studied for an MA in Spoken Word at Goldsmiths, University of London. This degree was one of the key stepping-stones in his journey to become a poet. He began to participate in open mic poetry and joined the capital’s Slam communities, followed by association with similar groups in the United States and Germany. He has since become a founder of the spoken word organisations Chill Pill and Keats House Poetry Forum, and he has received several writing fellowships, including from Cave Canem and Jerwood Compton.

His first book, The Perseverance (2018), intimately explores personal experiences, including his identity as a deaf poet. It won the Ted Hughes Award, the Sunday Times Young Writer of the Year Award, and the Rathbones Folio Prize, and was shortlisted for numerous other accolades, including the Griffin Prize. In 2019, Antrobus was named ‘Poet of the Fair’ at the annual London Book Fair.

His monologues are stunning studies of voice and substance, and his lyric poems are graceful and finely crafted. 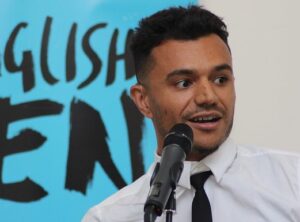 A dynamic contemporary poet, Antrobus is fast becoming one of the most acclaimed of his generation. His effervescent work testifies to the power and sophistication of British verse today. Merging the worlds of spoken and written poetry, his poems deploy arresting sonic effects to offer often hard-hitting social commentary. As a poet who is deaf, Antrobus also often integrates sign language into his performances and grapples with questions of communication in lively and captivating ways. He has an unmistakable mode of address and whether they are heard on stage or read aloud, Antrobus’s poems are impossible to forget.

His compositions have a direct, conversational quality, a feature that owes much to the importance of spoken word to the formation of his career and to his status a poet who foregrounds the power of hearing and being heard.

One of his earliest publications was Shapes & Disfigurements of Raymond Antrobus (2012), which was succeeded in 2017 by another pamphlet, entitled To Sweeten Bitter. The latter unpacks the bonds between himself and his late father, who had passed away three years before. In 2018, his first book, The Perseverance, was released to wide acclaim. Named after a pub of the same name in his hometown of Hackney, Antrobus’s debut is grounded in his life growing up in London. Among its many themes, the collection explores his experiences as a deaf poet interested in the spoken word. As a child, he was bullied at school for his deafness and was briefly misidentified as dyslexic.

Now, as an adult, his writing features on school syllabuses and he maintains his passion for teaching by linking his poetry with education. For Antrobus, this is one of the most important facets of his career as, in his words: ‘I felt that I got more education outside the classroom. That was part of why I started working in schools’ and bringing modern poetry to students. He also notes the worrying statistic that 75% of young deaf people in the UK, and 95% of deaf Jamaicans, are raised illiterate due to failings and ignorance in their education systems. This concern is one he passionately aims to flag up and help resolve through both his poetry and his teaching.