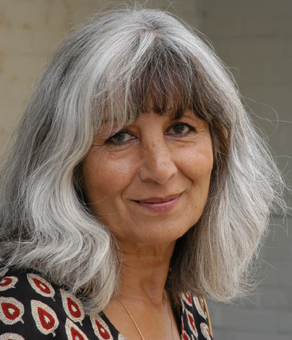 Mimi Khalvati was born in Tehran, Iran, in 1944 and moved to the Isle of Wight, England, when she was six years old. She grew up on the Isle of Wight, and lost touch with her mother tongue as she became more immersed in the English language. Khalvati was educated in England and Switzerland, and later spent some years in Iran working as a theatre director. She now lives in London, where she works as a poet, lecturer, and director of the London Poetry School.

[W]hat we have on show [in Khalvati’s poetry] is a remarkable and finely judged sense of patterning, especially in her use of repetition and internal rhyme. 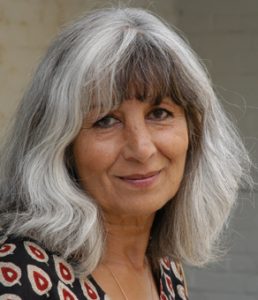 Since 1991, Mimi Khalvati has published nine collections of poetry, which are threaded together by her preoccupations with womanhood, motherhood, childhood, and the natural world. Her debut collection, In White Ink (1991), is the first sign of her enduring concern with womanhood and motherhood. Its title was inspired by Hélène Cixous’s observation that women write ‘in white ink’. Childhood is most explicitly explored in The Chine (2002), which focuses on the Isle of Wight where she spent much of her childhood, and Child: New and Selected Poems (2011), a collection of her poems on childhood. Khalvati’s preoccupation with the natural world is evident in Entries on Light (1997), Earthshine (2013), and her most recent collection, The Weather Wheel (2014). Khalvati has said that the most suitable form for her is the lyric, but she often makes use of and adapts the ghazal, a traditional Persian poetic form that comprises a relatively short poem written in couplets with a rhyme scheme or repeated phrase at the end of each couplet. Khalvati’s family and childhood in Iran are subtly woven into her poetry with delicate references, memories, and the occasional line in Farsi.