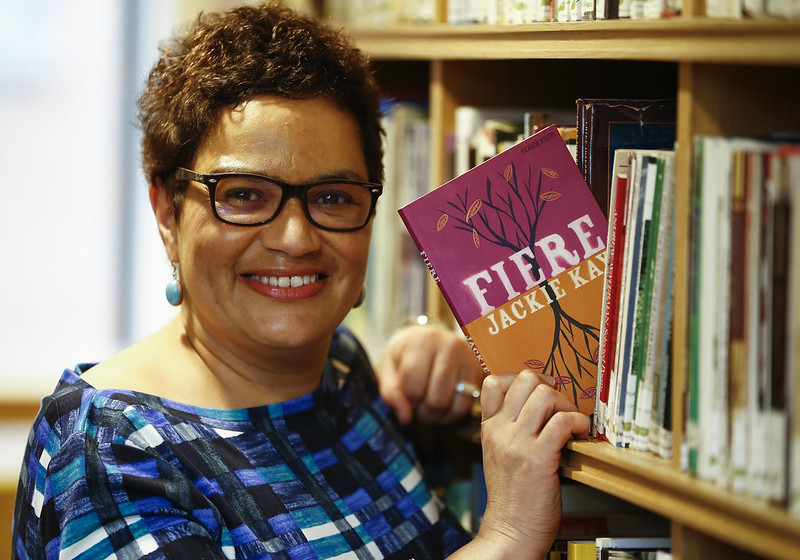 Jackie Kay (1961– ) is an internationally lauded and prize-winning Scottish writer of poetry, prose, and plays. Kay was born in Edinburgh and adopted at birth by ‘communist stalwart[s]’ Helen and John. She grew up in Bishopbriggs, a town on the northern fringe of Glasgow, before reading Literature at Stirling University during the early 1980s. After graduation, Kay staged Chiaroscuro (1986), her first play, soon followed by her second, Twice Over (1988). She subsequently achieved critical acclaim for her poetry collection The Adoption Papers (1991) and her debut novel, Trumpet (1998). In the twenty-first century, Kay’s growing and increasingly diverse body of work has been cemented as a defining pillar in the literary-cultural architecture of Britain, and of Scotland in particular. Between 2016 and 2021 Kay was the Makar, the poet laureate of Scotland. Presently, Kay serves as Chancellor of the University of Salford (2015– ), dividing her time between Manchester and Glasgow.

I think it’s interesting if you’re adopted, you already come as a story and the story is the thing that’s handed down […] and instead of passing down DNA, blood, and biology, what is passed down are stories and then you bond over the story. 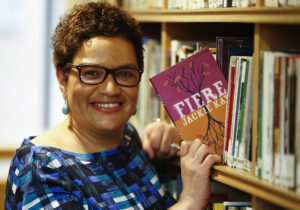 Since her first attempt at writing a novel aged twelve – One Person, Two Names – Kay has written a myriad of works for adults and children: two novels, several poetry and short-story collections, a memoir, an autobiography, and plays for the stage and radio. She has received countless accolades for her work: most notably, a Saltire Society Literary Award for First Book of the Year (1992), a Lammy for Transgender Literature (1999), an MBE (2006), Fellowship of the Royal Society of Literature (2002), a CBE (2020), and her aforementioned tenure as the Scots Makar (2016–2021).

Nevertheless, Kay’s writing maintains a critical and interrogative relationship towards both Britain and Scotland. Originally produced in 2007 for BBC R3’s ‘Abolition Season’, Kay’s play The Lamplighter (2008) marks the bicentenary of the abolition of the slave trade by exploring the impact of Scotland’s role in that inhuman enterprise:

It was a not so delicious irony that the bicentenary of the abolition of slavery was also the tricentenary of the union between Scotland and England, a union which allowed Scotland to profit from the slave trade in a big way (Kay 2020 [2008]: vii).

Alongside criticising the Union’s role in the slave trade, Kay has attacked the social, economic, and cultural legacy of Thatcherism in Britain, the punishment of asylum seekers and refugees by the state, the presence of Trident in Scotland, and the jingoistic nativism of contemporary politics. Kay’s creative critiques of the British union resonate with her broader focus on isolated outsiders and fragile relationships in the context of social identity. Discrimination based on race, ethnicity, gender, sex, and class are threaded throughout Kay’s work. This perhaps motivates her abiding concern with ‘the presence absence makes’ (Kay and Young, 2016: 32:10–32:16)  which intersects with Kay’s focus on dis/harmony of multiple identities, transformation and metamorphosis, death and grief, (unrequited) love and loneliness, memory and memorialisation, and the need for community – ‘a whole new life’ (Kay 1993: 41).

Cumulatively, Kay’s work stands in the space between ‘status quo’ and ‘outsider’. Not only does it provide a critical examination of Britain and who belongs in it, but it also forms a crucial contribution to imagining the possibility of a post-British society.

Out of Bounds: British Black & Asian Poets, with James Procter and Gemma Robinson (2012)

The Frog Who Dreamed She Was an Opera Singer (1998)