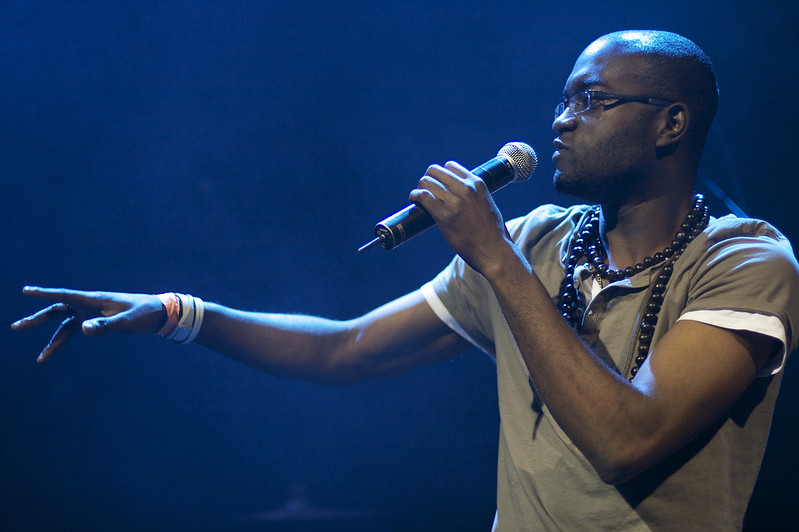 Inua Ellams FRSL is a multimedia performer and poet who writes for the stage and the page  as well as working in graphic design. Born in Nigeria in 1984, he has been a Londoner since adolescence. His first poetry pamphlet Thirteen Fairy Negro Tales (2005), published by flippedeye, was critically and commercially successful, selling over 2,000 copies. He made his British stage debut four years later, in 2009, with the play The 14th Tale which won an Edinburgh Fringe First award. Ellams was the poet-in-residence at Covent Garden in 2010 and at the Tate Modern in 2011. Following commissions from Louis Vuitton, BBC Radio, Soho Theatre, Battersea Arts and Tate Modern, his play Barber Shop Chronicles (2017–2019), about the things Black men discuss while having their hair done, catapulted him into the broader public consciousness with two sell-out runs at the National Theatre. He has performed on stages across the world, including at the Sydney Opera House and in Denmark, and at most of the major festivals in Britain, including Glastonbury and Latitude. He is an ambassador for the Ministry of Stories, a non-profit literacy project based in East London. With four pamphlets out, Ellams published his first full collection The Actual / Fuck in 2020.

[Ellams’s] voice is interestingly shaped and transmuted by his transnational journey and residence in the United Kingdom which has offered up a ragbag of high and low forms, the whimsy of Salman Rushdie and Neil Gaiman, the playfulness of Terry Pratchett, the powerful beauty and delicacy of Shakespeare’s Hamlet. 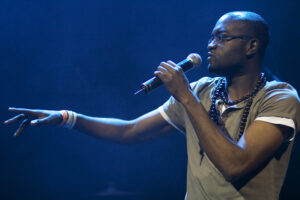 Ellams’s lyricism and cultural references point to influences ranging from Shakespeare’s Hamlet to the intellectual playfulness of Terry Pratchett, with a strong undertow running throughout of Nigerian oral literature or orature. Critic and writer Delia Jarrett-Macauley highlights the success of Ellams’s ‘linguistic, but low-key virtuosity’, as strikingly demonstrated in the lines written for his stage characters. Inspired by his heroes, the Nigerian writers Chinua Achebe and Ben Okri, Ellams’s poems and plays tell stories of his own life and those of others’ that are infused with the myths, legends, market gossip and lively cultural intermingling of his birth country.

Writing about Ellams’s dramatic work, Nigerian critic Uche-Chinemere Nwaozuzu notes that the solo drama style of his play The 14th Tale reflects characteristic dramatizations in Nigeria of the outsider figure who struggles to come to terms with their identity and with fate. For Nwaozuzu, the play’s protagonist is a ‘split personality who battles with inherited personal demons and the need to chart a social identity’ during his youth in Nigeria and later in the diaspora. At the same time, he embodies the classical image of the Greek hero at the mercy of fate. Another of Ellams’s influences, Wole Soyinka, writes about characters beset by internal conflict in comparable ways, such as in a play like The Road. Here we see Ellams bringing together and channelling influences from European and Nigerian dramatic traditions into the British dramatic scene.

Ellams’s first full poetry collection The Actual / Fuck began its life as an anti-Trump project tentatively called ‘Fuck 45’ that Ellams composed on buses, trains and in the in-between moments of his busy life (Armitstead, The Guardian, 2019). His target was clearly the populist right-wing nationalism of the 45th president of the United States, and the way in which Donald Trump’s values revealed that country’s divided consciousness. Drawing also upon his own experiences of troubled national myth-making, Ellams’s collection comprises fifty-five poems that engage passionately with themes of empire, nationalism, and racism, while also calling out the corroding, toxic effects of some forms of masculinity.

Speaking about his writing process at the Oxford Playhouse Search Party online event in November 2020, Ellams observed that many of his ideas first start as poems and then move into dramatic and dialogue forms that are further fleshed out on stage. He feels therefore that he is first and foremost a poet. However, all of his work grows out of his two major thematic and experiential influences: his odyssey as a migrant to Britain, and his experience of finding ways to belong in his new country. His journey from Jos, Nigeria to London via Dublin at the age of twelve is an especially major influence on his stage work and is frequently alluded to if not directly referenced in his plays, especially in his early work. His poems deal prominently with questions of being-in-place, and of cultural differences experienced in the African diaspora.

Ellams’s work is produced  in the moment and he shares it generously, drawing on the world as he sees it and performing off the cuff at the audience’s whim. In performance, he is innovative and daring. For example, he often uses an app to search for and share poems using single words suggested by the audience. His virtuoso mix of deep cross-cultural allusion with technological innovation is reflected in his recognition as one of the Royal Society of Literature’s 40 under 40 writers.