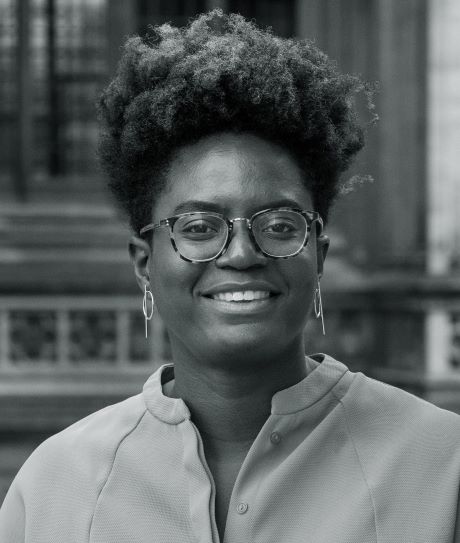 Reni Eddo-Lodge (1989– ) is a journalist, podcaster, and author. She was born in London in 1989 to Nigerian parents and raised by her care-worker mother. Eddo-Lodge came to global attention with the publication of her Jhalak Prize winning non-fiction collection, Why I’m No Longer Talking to White People About Race, published in 2017. The book developed from a controversial blog post by the same name that Eddo-Lodge penned in 2014. Eddo-Lodge has written for The Guardian, Dazed and Confused, and The New York Times, amongst many other publications. She worked as a student activist while completing her degree in English Literature at the University of Central Lancashire and sat on the National Executive Committee of the National Union of Students in 2013. Her writing focuses on intersectional questions of race, exploring the interplay of culture with feminism and race politics.

Reni’s book lifts the lid on what it feels like to be black in contemporary Britain, and on the myriad ways in which structural racism shapes interpersonal relations.

Man Booker Prize-winning author Marlon James hailed Eddo-Lodge’s Why I’m No Longer Talking to White People About Race as a book that was “begging to be written.” The book was borne out of the thoughts she shared on her blog in 2014, and sparked a national conversation in the UK about the blinkered view of race and privilege held by many white people. In the blog post, reproduced in the book, Eddo-Lodge asks the fundamental question of race and class politics in the twenty-first century: “Who really wants to be alerted to a structural system that benefits them at the expense of others?” (6).

She notes in the book that the responses to the post revealed the continued demand by white people that black people articulate their experiences so that white people might better understand them, even by those white people who purport to be aware of their privilege. Despite her desire to quit talking to white people about race, subsequent to the blog post’s viral dissemination Eddo-Lodge has become an icon of intersectional race debates.

In 2018 her book was named the most influential book ever written by a woman, beating Simone de Beauvoir’s The Second Sex and Maya Angelou’s I Know Why The Caged Bird Sings. In an article in 2017, Eddo-Lodge notes that race-related violence had inflected her life long before she became politically active, referring to the racially-motivated murder of Stephen Lawrence in 1993. Her book charts the history of race in the UK, and her own engagement with it through independent research, moving through systemic racism, white privilege and the concomitant fear of the loss of that privilege, through to black feminism, and intersectional concerns of the imbrication of class with race. Eddo-Lodge’s concern with intersectionality reflects a belief that race and class are not distinct systems of oppression, but rather work in tandem.

Before the publication of her award-winning debut, Eddo-Lodge worked as a freelance journalist. She concentrated on questions like cultural appropriation in yoga, and housing inequality in London’s property market, and produced a guide to being a black feminist. Subsequently, she has launched a popular podcast, titled About Race. In it, she further explores the themes she addressed in her book, locating them in contemporary debates, such as Brexit and the Calais refugee camps. In her podcast Eddo-Lodge talks with activists working in refugee camps such as Road to Freedom’s Ra’ed Khan as well as the first black woman to hold a seat in the House of Commons, Shadow Home Secretary MP Diane Abbott, and the actor and rapper Riz Ahmed. Her progressive view of race and intersectional resistance imbues her work with political urgency while her writing and podcasting remain accessible and non-academic, appealing to diverse audiences.