Diana Evans was born in 1972. Of mixed white British and Nigerian descent, she described herself in a BBC radio interview as ‘a Londoner’, one who has ‘lived in London all her life’. During her twenties she suffered a major bereavement with the death of her twin sister, Paula.  She completed the MA in Creative Writing at the University of East Anglia, during which she finished her first novel, 26a. This book, which is dedicated to her deceased sister, won a Betty Trask Award, and was the inaugural winner of the Orange Award for New Writers.  Evans is the author of two further novels: The Wonder (2009) and Ordinary People (2018). A former dancer, she has published short stories in various anthologies, and also works as a journalist and critic. 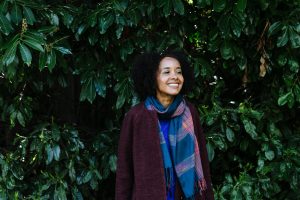 Each of Evans’s novels combines a cast of characters who possess psychological depth and complexity with a strong authorial interest in the particularities of a specific place at a specific time. Her first novel, 26a (2005), which the author describes as a ‘monument’ to her twin lost to suicide, explores the lives of four sisters of mixed white British and Nigerian heritage, who grow up in Neasden, London during the 1970s and 80s, and who spend three formative years of their girlhood in a suburb of Lagos. Her second novel, The Wonder (2009), focuses on Lucas, a black Londoner in his twenties whose 1990s investigations into the life story of his father, a dancer and choreographer, take the narrative through 1950s Jamaica and 1960s Notting Hill. Her third novel, Ordinary People, focuses on the challenges faced by two black, middle-class couples who are raising young children in London during the years of the Obama presidency. Evans has described this work as her introduction of a female and black viewpoint to the middle-class, suburban travails depicted by John Updike and Richard Yates (both writers whom she admires).

In a 2005 interview with Bernardine Evaristo, Evans declared that she ‘want[ed] to write about human experiences and universal experiences rather than write about what it means to be black or mixed race’. In 2018, however, she stated that although she consciously avoids themes such as slavery and migration, she does want to make black people ‘visible’ through her writing, and that Ordinary People aims to convey a ‘black British perspective in the contemporary age’. Common threads in her three novels to date include the strong connection between her personal experiences and her fictional worlds: bereavement, dancing, and the strains on one’s sense of identity and one’s relationships that parenting young children involves have all figured significantly in her own life. Each novel involves elements of the speculative, supernatural or non-realistic, as well, and music plays a central role both in her life and in all three novels. ‘Each novel has a soundtrack’, she has said; with Ordinary People she has realised this through the publication of a playlist to accompany the text.