Born in London, Bernardine Evaristo (1959– ) studied at Rose Bruford College of Speech and Drama and went on to co-found the Theatre of Black Women in 1982. Her focus then shifted from performance to writing, and she has gone on to publish seven books of poetry and prose, as well as gaining a PhD in Creative Writing from Goldsmiths, University of London. She has won numerous literary awards, and her verse novel, The Emperor’s Babe was selected by The Times as one of the ‘100 Best Books of the Decade’ in 2010. In 2019, she was awarded the Booker Prize for her novel, Girl, Woman, Other. She is currently Professor of Creative Writing at Brunel University London.

[Evaristo’s] narratives raise crucial questions around what it means to be ‘here’, producing post-national landscapes in which Britain appears as the crossroads for a series of global movements and migrations.

Evaristo’s work spans times, places, and literary genres, often exploring what she has called ‘the hidden narratives of the African diaspora’ and ‘cross[ing] the borders of genre, race, culture, history, and […] sexuality’. From The Emperor’s Babe (2001), set in multicultural Roman London in the 3rd century CE, to the semi-autobiographical Lara, which traces its path across seven generations and three continents, Evaristo’s work reimagines neglected histories in vibrant, evocative ways. Challenging the reader to contemplate the past and its legacy in the present, Blonde Roots (2008) inverts the racial dynamics of the transatlantic slave trade, depicting a world in which Europeans are enslaved by Africans, while her most recent novel, Mr Loverman (2013), examines sexuality and societal pressures through the experience of her Antiguan-born, London-living protagonist. 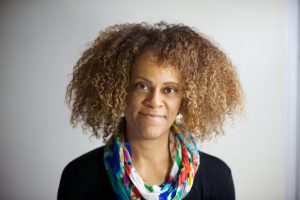 Adeptly combining verse and prose, Evaristo’s writing defies easy categorisation in a way that simultaneously reflects the refusal of her characters to be pigeon-holed into one, singular identity. She has made the form of the ‘verse novel’ her own, utilising her earlier experience of theatre and performance to infuse her work with a rhythm, tone, and voice that allows her writing to straddle the boundaries between the written and the spoken word. As author Ali Smith has observed, ‘Bernardine Evaristo can take any story from any time and turn it into something vibrating with life’.

Mapping the Edge, written with Alison Fell and Amanda Dalton (2002)