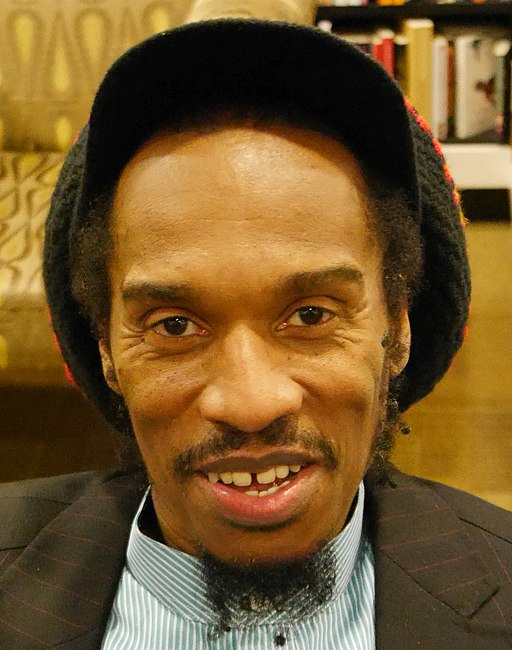 The artist and activist Benjamin Zephaniah was born in Birmingham to Caribbean parents. His mother, a Jamaican Windrush immigrant, recalls Zephaniah and his twin sister’s date of birth as 15 March 1958, while official documents record 15 April. Having been moved frequently as a child and expelled repeatedly from school, he spent time in Borstal training while a teenager. Zephaniah honed his performance skills as a blues party ‘toaster’ in the early 1970s, and published his first collection of poetry, Pen Rhythm, while living in London in 1979. He has subsequently produced several prize-winning plays, collections of poetry, musical records, novels for teenagers and children’s books. Zephaniah rejected an OBE in 2003, for its imperial connotations, and has refused nomination to become the UK poet laureate. He currently lives in a village outside Lincoln, teaching at universities in the United Kingdom and China, and continuing to perform widely. He is a confirmed vegan and a Kung Fu practitioner.

[W]hat characterises all of Zephaniah’s writing to date […] is its stress on the redemptive forces of love, laughter, and peace. 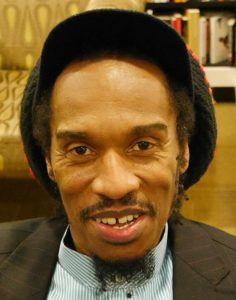 Christian Habekost describes dub poetry – Zephaniah’s chief genre – as an ‘artful fusion’ of ‘oral and text media, singing and talking, music and literature’, with patterned ‘riddim’ its ‘central formative aspect.’ Zephaniah’s first EP, Dub Ranting (1982), reflects this fusion, integrating the ‘ranting’ of predominantly white British punk performers with black Caribbean-influenced dub music, which itself merges reggae and spoken word. Pen Rhythm (1979), his first collection of poetry, was published by the London left-wing cooperative bookstore, activist space and vegetarian food shop Whole Thing. While describing himself as ‘a mixture of England and Jamaica, but mostly England,’ Zephaniah is often critical of English society, situating his work in opposition to racial and ethnic discrimination. Heavily involved in the Brixton Riots of the mid-1980s, his poetry collections including the Dread Affair (1986), City Psalms (1992), and Too Black, Too Strong (2001) are prominently concerned with black identity and activism. He has written several poems in remembrance of those killed as a consequence of racism and xenophobia, including Joy Gardner, Stephen Lawrence and Steve Biko.

Zephaniah’s poetry is centrally and sometimes searingly concerned with personal struggles, including his own divorce and infertility. His fourth collection, Propa Propaganda (1996), ends with the chilling lines:

His most celebrated work for children, Talking Turkeys, brings together short rhyming poems that humorously muse on the plight of fearful animals and mistreated children. Bob Mole describes the wit in Zephaniah’s work as a ‘strong flail’ which ‘even if it doesn’t bring change, makes the laugher feel better for a while’. Marketed at teenagers, Zephaniah’s novels are modelled on young outcasts and immigrants. The satirical film Dread Poets Society (1992) – starring Alan Cumming, Emma Fielding and Timothy Spall alongside Zephaniah – is a self-conscious reflection on Zephaniah’s place in the academy. He has also appeared in multiple radio programmes and television documentaries. In the 1920s period drama Peaky Blinders he plays Jeremiah Jesus, an ex-military preacher and gangster.

Zephaniah continues to travel widely for performances (once performing on five continents in twenty days), and has maintained a sustained interest in global politics. City Psalms alone contains reference to political struggles in Australia, El Salvador, Ethiopia, Kurdistan, Mali, Palestine, the United States and the imagined communities of ‘Utopia’ and ‘McDonalds’. As a frequent and willing collaborator, one of his most genre-bending productions, Naked (2005), contains authorised prints of Banksy artworks in the poetic liner-notes accompanying a musical record. Zephaniah’s later writing has turned to teaching and reflecting on his own life and work. He dedicates his autobiography, The Life and Rhymes of Benjamin Zephaniah, to himself:

And why not?
There was a time I thought I wouldn’t live to thirty.
I doubled that and now I’m sixty.
Well done, Rastaman, you’re a survivor.
A black survivor.

The Life and Rhymes of Benjamin Zephaniah (2018)

Listen to Your Parents Playscript (2007)

The Bloomsbury Book of Love Poems (1999)