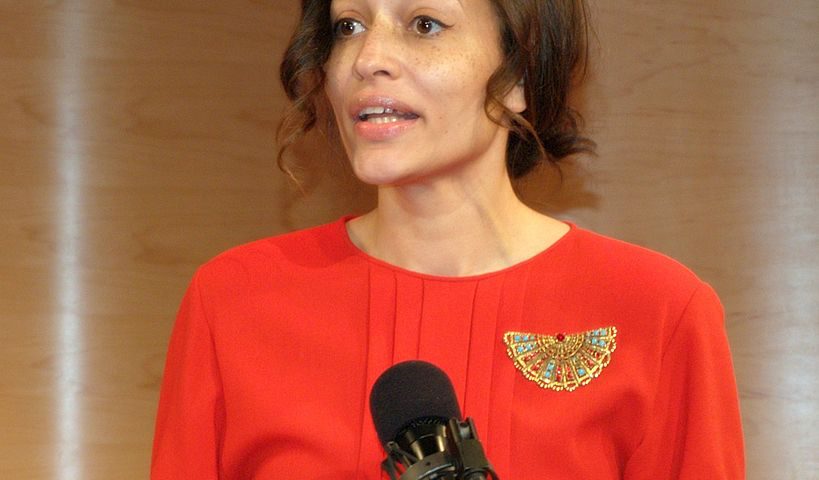 Born in London to a Jamaican immigrant mother and English father, Smith (1975– ) has written multi-award winning novels as well as many essays and short stories. Her debut novel, White Teeth (2000), won awards such as the James Tait Black Memorial Prize, the Whitbread First Novel Award, and the Guardian First Book Award, whilst On Beauty (2005) was shortlisted for the Man Booker Prize.

Who or what is the greatest love of your life? The English language.

White Teeth sees Smith intricately weave together an array of characters and storylines, in an attempt to make sense of the tangle of cultural diversity that is North-West London. She leaves nothing unaddressed in her whirlwind of a novel, as she interrogates issues of race, religion, and true ‘Britishness’ amidst pressures of cultural assimilation, however refuses to hand answers to the reader in a neatly packaged box. She says that this is partly because she herself is witness to the ‘movability of identity’, as a biracial woman. Smith is sensitive to this fluidity throughout her writing process:

I guess when I’m writing, part of what I’m insisting on is that whatever we’re living in at the moment is not, in some way, fundamental. Things are constantly open to change.

Smith’s most recent novel, Swing Time (2016), by no means shies away from this complexity, as although she explores the friendship of ‘two brown girls’, the author deftly handles issues of social hierarchies, societal expectations, and identity. As the first of her novels to use first-person narrative, Smith departs somewhat from the traditions of her previous works. However the memoir-esque novel lends itself well to the nuances of the protagonist’s coming of age, as well as the historical nostalgia inherent in the novel.

In 2002, Smith was elected a fellow of the Royal Society of Literature, and is currently a professor at New York University, where she teaches as part of the prestigious Creative Writing Program.