Warsan Shire is a poet and activist born to Somali parents in Kenya in 1988. When she was only a year old her family migrated to England and she has been described by critics and fans alike as a ‘refugee poet’. In 2014 she was appointed the first Young Poet Laureate for London, where she lived until 2015 before moving to Los Angeles. She is a noted Web Poet and has also been widely published in respected literary journals and magazines.

She is the author of two chapbooks, Teaching my Mother How to Give Birth (flipped eye, 2011) and Her Blue Body (flipped eye, 2015), as well as a pamphlet titled Our Men Do Not Belong To Us (Slapering How Press and the Poetry Foundation, 2014). She also wrote and produced an album of spoken word titled warsan versus melancholy (the seven stages of loneliness) (Bandcamp, 2012). Her first full collection, Extreme Girlhood, is expected in 2018/2019.

It’s East African storytelling and coming-of-age memoir fused into one. It’s a first-generation woman always looking backward and forward at the same time, acknowledging that to move through life without being haunted by the past lives of your forebears is impossible. 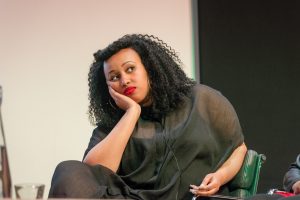 Shire’s verse was put to work in both political and pop culture contexts in 2016 and 2017, a natural progression for a poet whose work concentrates on themes of nation, exile, displacement, belonging, the black female body, infidelity and violence. Her line ‘No one leaves home unless home is the mouth of a shark’ (from ‘Conversations About Home (at the Deportation Centre)’ in Teaching my Mother How to Give Birth) was taken up by protestors resisting Donald Trump’s travel ban in 2017. Shire’s work was also famously featured in Beyoncé’s 2016 visual album Lemonade.

Shire arguably belongs to the generation of Web Poets who have used social media platforms such as Tumblr, Twitter and Instagram to publish their work before entering the more formal publishing industry. Other notable Web Poets include Nayyirah Waheed and Rupi Kaur. The limitations and possibilities of social media platforms have shaped the format, style, length, and reception of Shire’s online verse.

She has also experimented successfully with other media. Her chapbooks explore a variety of styles, moving seamlessly between verse and prose-poetry. An album of her spoken word verse warsan versus melancholy (the seven stages of being lonely) (2012) is also available on Bandcamp.

Shire has suggested that her work responds to problems of representation: ‘When I was younger I wanted to read something somewhere that I could see myself in.’ She describes her verse as ‘character-driven’, noting: ‘I don’t want to write victims, or martyrs, or vacuous stereotypes.’ Alexis Okeowo writes that ‘Shire conjures up a new language for belonging and displacement’ and scholars have noted the extensive use of her poetry to create awareness about the European migrant crisis and gender-based violence.

warsan versus melancholy (the seven stages of being lonely) (2012)