Kamila Shamsie was born in 1973 in Pakistan. She is the daughter of the acclaimed journalist Muneeza Shamsie, grew up in Karachi, studied in the US, and now lives in London. Her first novel In the City by the Sea was published in 1998, while she was still in college and was shortlisted for the John Llewellyn Rhys Prize. In the following year, she was awarded the Pakistan Prime Minister’s Award for Literature. Shamsie is the author of seven novels. Her novel Burnt Shadows (2009) was translated into more than twenty languages and shortlisted for the Orange Prize for Fiction. Her most recent, Home Fire (2017) has been longlisted for the Man Booker prize.

Shamsie is adept at excavating the past and braids the personal and political to great effect. All the while she builds tension and keeps us guessing about the fate of her characters. The end result is both complex and spell-binding. 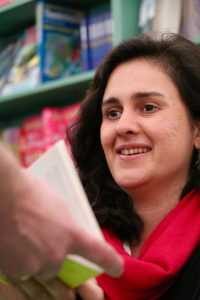 Kamila Shamsie is one of the most remarkable storytellers of our time. In lucid, compelling prose she weaves narratives that often cross time and space, as for example in Burnt Shadows, where she traces the intertwining fate of two families through the final days of the second World War, to Pakistan in the 1980s, and the aftermath of September 11th, 2001.

As different as the characters in her novels are, and the relationships that bind them together and around which the different narratives evolve, her books have one thing in common: they always feature Karachi, Shamsie’s home town. Sometimes, like in A God in Every Stone the reader is taken into the past, into a Karachi that is marked by the aftermath of the first World War and the struggle for independence. At other times, as in Kartography which has been described as ‘a boisterous tribute to her home town’, Shamsie sketches a more contemporary image of the city. In an interview, Shamsie stated that her decision to explore Karachi in her novels came from her own homesickness – she wrote her first novel while living in the US – and that for her writing became ‘a way of recreating the world on the page’. In her writing, this is noticeable. There is a deep affinity for the city, its inhabitants, its history, and an incredible attention to detail, to descriptions of sounds, smells, and landscapes that fully immerse the reader in the narrative. There is a sense of bringing to life stories and characters that have not yet been written about, while at the same time raising timely questions about loyalty, identity, love and, most of all, about home and a sense of belonging in a changing world.