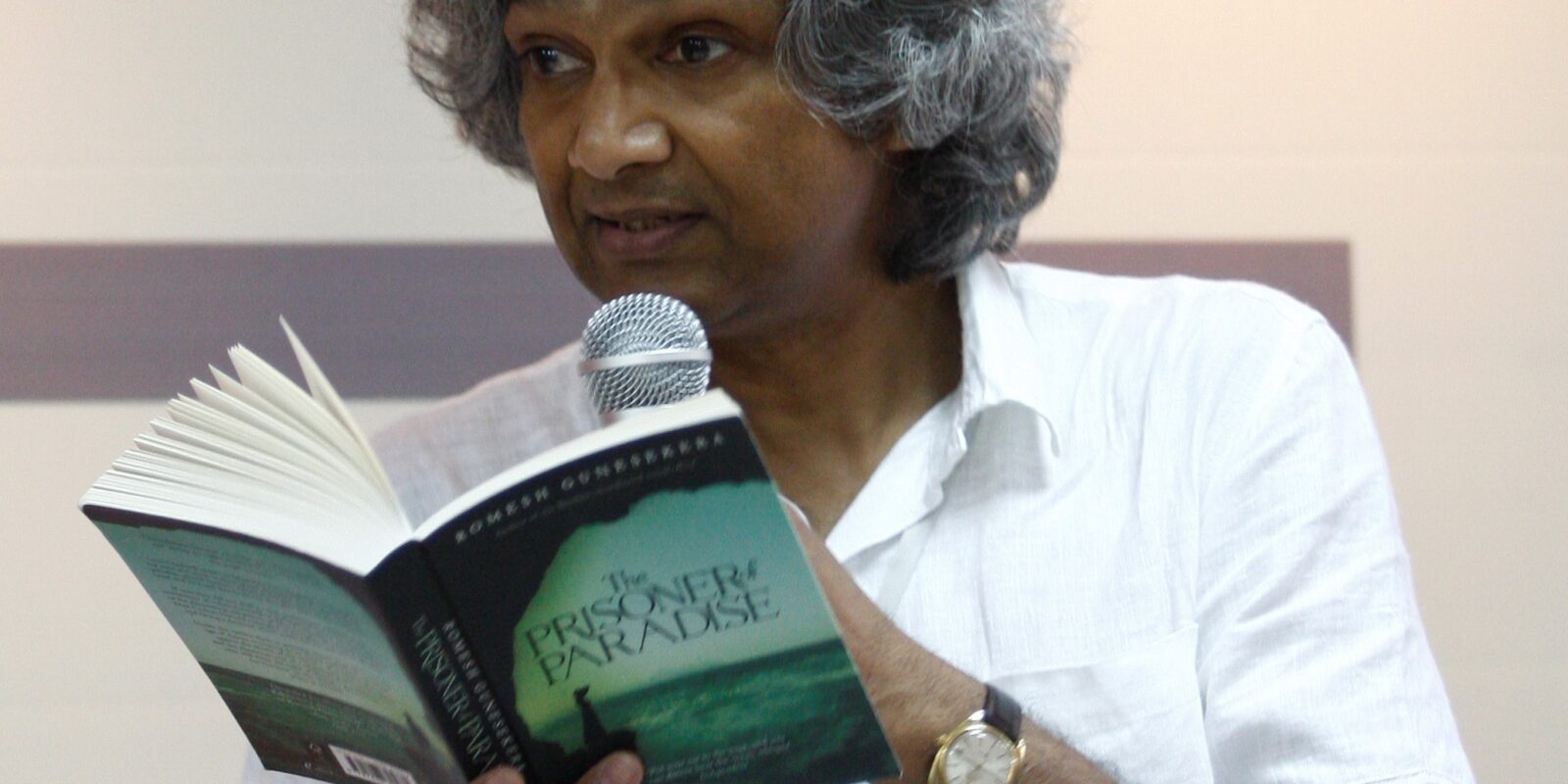 Romesh Gunesekera was born in 1954 in Sri Lanka (then Ceylon), spending his childhood in Sri Lanka and later, the Philippines. In 1971, he moved to England, where he read English and Philosophy at the University of Liverpool. Before he embarked on his writing career, Gunesekera worked at the British Council, managing its international educational projects in Eastern Europe and East Asia. He debuted as a prose writer with the short story collection Monkfish Moon (1992) and is best-known for novels such as the Booker-shortlisted Reef (1994), The Sandglass (1998) and Heaven’s Edge (2002). He has been awarded numerous global literary distinctions, writing fellowships and residencies, and has judged prizes such as the Caine Prize for African Writing and the Sunday Times Short Story Award. Currently, he teaches creative writing at Goldsmiths University, London, and serves on the board of two international magazines of new writing, Wasafiri and Moving Worlds.

I feel the world is quite a small, connected place. I don’t think identities have to be singular. They are always plural.

Most of Romesh Gunesekera’s works are set in his native Ceylon, or Sri Lanka from the 1960s. His fiction opens an expansive window onto the ethereal, yet politically tumultuous country of his growing-up years. Featuring quotidian scenarios against the backdrop of the nation’s civil unrest, the writer elevates Ceylon from an obsolete geo-political entity to memorialise it as an evocative juncture in Sri Lanka’s divided history. Memorable, well-fleshed out characters feature throughout Gunesekera’s works; from the various servants that work under the entitled, oppressive yet vulnerable Sri Lankan elite to the England-based diaspora.

Alongside themes of cultural identity, memory and desire, a recurrent thread in his stories is of inter-class kinships, best seen in his first novel Reef (1994), which was nominated for the Booker Prize and the Guardian Fiction Prize. Widely acclaimed as a stylistic masterpiece for its dextrous wordplay and sensuous descriptions of the Sri Lankan landscape and cuisine, the novel tells the story of the child chef Triton, who seeks a gastronomical route to the heart of his employer, an upper-class marine biologist ‘Mister Salgado’. As communal tensions grip the nation and interrupt their lives, Gunesekera demonstrates how ‘the intimate recesses of the domestic space become sites for history’s most intricate invasions.’

Speaking at the 2020 Liverpool Literary Festival, Gunesekera traced his beginnings as an anglophone writer to Liverpool, where he understood the craft of ‘language on a page’ through the city’s numerous bookstores and public libraries. His works are therefore at once British and Sri Lankan in their narration of place and identity. For instance, The Sandglass (1998) and Heaven’s Edge (2002) straddle the different temporal and geographical poles of Britain and Sri Lanka to explore diasporic experiences. Prominently, Heaven’s Edge merges the author’s characteristic historical fiction with the realms of fantasy and speculative fiction by imagining a violent, dystopian Sri Lankan future.

Over the years, alongside six novels and three short fiction collections, Gunesekera has written prolifically across forms and non-literary genres. His essays, poetry, and short fiction have been published in anthologies and magazines such as The New Yorker, Time, Granta, Paris Review, London Magazine, Wasafiri, Kunapipi, and elsewhere. In a more experimental vein, Noontide Toll (2014) eludes immediate formal classification as a series of inter-linked short stories.  He has also written content for radio and co-authored Novel Writing: A Writers’ & Artists’ Companion (2015) with Scottish writer AL Kennedy. His latest work is Suncatcher (2019), a novel that revisits the world of postcolonial Sri Lanka, this time through the adolescent worldviews of its protagonists, Kairo and Jay.