Born in Scotland in 1964, Aminatta Forna moved to Sierra Leone with her Scottish mother and Sierra Leonean father when she was six months old. She travelled widely while growing up, including time in Iran, Thailand, and Zambia. She studied Law at University College London, before working for the BBC in the 1990s, making programmes as a reporter and documentary maker. Her first book, the memoir The Devil that Danced on the Water, appeared in 2002 and was shortlisted for the Samuel Johnson Prize. She has since published three award-winning novels: Ancestor Stones (2006), The Memory of Love (2010), and The Hired Man (2013). She is a Fellow of the Royal Society of Literature, and was awarded an OBE for services to literature in 2017.

Aminatta Forna writes through and beyond personal experience to speak to the wider world in subtly constructed narratives that reveal the ongoing aftershocks of living through violence and war. 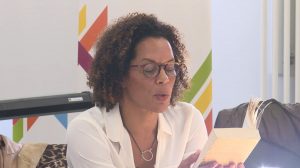 Aminatta Forna’s works explore the historical, cultural, and emotional repercussions of societies that have experienced conflict. Her first three books – The Devil that Danced on the Water (2002), Ancestor Stones (2006), and The Memory of Love (2010) – are set in Sierra Leone. The Devil that Danced on the Water recounts Forna’s search for the men that killed her father, who was wrongfully hanged in 1975 for treason against Sierra Leonean dictator Siaka Steven’s government. It offers an incisive and moving account of her father’s life and death, while bringing to light the historical background to the civil war that wracked the country from 1991 to 2002. Ancestor Stones tells the intertwined stories of four women, all cousins, whose different mothers were in a polygamous marriage with patriarch Gibril. Set in an unnamed West African country that closely resembles Sierra Leone, the novel is an exploration of family, history, and female agency. The Memory of Love is an intergenerational story of passionate obsession and betrayal, set in pre- and post-civil war Sierra Leone.

In her most recent novel, The Hired Man, her geographical focus shifts to Croatia, inviting parallels between how it and Sierra Leone have negotiated the aftermaths of their largely contemporaneous experiences of civil war. In her own words:

I wanted to move the action beyond the African continent and into the west, where I would invite readers to reconsider some of their assumptions about wars all over Africa.

Forna unsettles readers’ preconceptions, both by such acts of unexpected transnational comparison, and by telling the stories of those marginalised from public view. Her meticulously researched books often feature ordinary people buffeted by historical currents beyond their control, allowing readers to engage emotionally in individual lives while gaining perspective on a broad canvas of societal change.