Close reading of A House for Mr Biswas

The analysis is of the following paragraph from V. S. Naipaul’s A House for Mr Biswas (1961)

But bigger than them all was the house, his house.

A House for Mr Biswas has been canonized, as Harish Trivedi says, ‘as one of the greatest postcolonial novels in English’. But it was first published in 1961, three years into the (ultimately frustrated) project of West Indian Federation, and a year before the formal independence of Trinidad, where it is set. So it would be more accurate to call it a cusp novel, written and published between two eras: when the colonial dispensation was clearly coming to an end, but before the independent state of Trinidad and Tobago had officially been born. 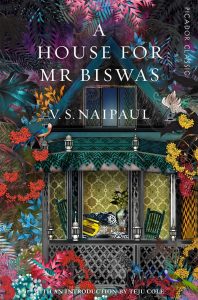 Ever since its publication, it has been read as a book about independence and autonomy. Mr Biswas is born into a family of ‘East Indian’ plantation labourers in rural, colonial Trinidad. The plot describes his search for a house of his own. The motif of the ‘house’ in the book stands for the sovereign ownership of space or territory: a topical subject for a Trinidadian author at this time. But it is also a metaphor for the novel itself. Henry James famously spoke of the ‘house of fiction’, whilst Iris Murdoch said ‘a novel is a house for free people to live in’. Naipaul extends and scrutinises this common literary metaphor. If Mr Biswas is looking for a sovereign, autonomous dwelling, the narrator is looking, also, for a suitable form of literary ‘housing’: for a form that can communicate the specificity of Mr Biswas’s experience.

The quoted passage, taken from the prologue, strikes a defiant, apparently triumphant note. In a proleptic flash-forward to Biswas’s eventual death from heart disease, Naipaul is listing the possessions he leaves behind. That Biswas should leave behind ‘the house, his house’, suggests that his quest in the novel will – like the best stories about up-by-the-bootstraps self-creation – be difficult but ultimately successful.

The body of the novel, however, qualifies this suggestion. Biswas does buy the house and is immensely proud of having done so. But his health, and his life, are used up in the quest; the house is overpriced, badly designed and dysfunctional; and at his death he leaves it heavily mortgaged to the bank, so there is a question as to whether he really ‘owned’ it. This casts a new light on this opening passage. Are the bold, exclamatory sentences (‘How terrible it would have been…’) protesting too much: making an overstated, defensive claim to justify Mr Biswas’s labour in the face of scepticism about the value of its fruits?

The second thing to note about the passage comes in the last line. The greatest indignity, it is stated, would be to die ‘unnecessary and unaccommodated’. But who states this? To whom do these words belong? Did Biswas fear being ‘unaccommodated’? Is Naipaul perhaps writing, as he is often supposed to be doing, from the perspective of Biswas’s son, Anand? Or is Naipaul here speaking in his own voice, making a bold, personal claim about the indignity of colonial existence? All three readings are permitted by the text, and they are not mutually exclusive. But the word ‘unaccommodated’ also belongs to Shakespeare’s King Lear – ‘unaccommodated man is no more but such a bare, forked animal as thou art’ he says when, stripped of his kingdom, he finds himself homeless on the heath. Throughout the novel Biswas’s homelessness, and the psychological turmoil this causes, shadow Lear’s homelessness and turmoil.

If Biswas dies in ambiguous possession of his house, Naipaul is only ever in ambiguous possession of the language with which he ‘houses’ or elegises him. ‘Unaccommodated’ is the tip of an iceberg of allusion and reference to the British literary canon through which Naipaul articulates the ambiguous sovereignty of the Caribbean novel in 1961. The major question that underlies Biswas, then, concerns how the postcolonial future is to be imagined, and where it is to be lived. What conceptual vocabularies were available, at the moment of decolonisation, to the statesperson or to the artist? In what ways did anti-colonial visions of national and cultural sovereignty surreptitiously carry over an understanding of ‘nationhood’ or ‘culture’ inherited from the colonial past? These were questions he would return to in The Enigma of Arrival, where he asks how the nature of his colonial education shaped his relationship with England, English culture, and the English landscape.