Close reading of The Impressionist

The analysis is of the following paragraph from Hari Kunzru’s The Impressionist (2003 Penguin edition), pp. 187–8.

Walking into whiteness. In spite of his luck with the soldiers it takes all his courage. As he approaches he sees that the station windows have been blocked with sandbags, and English soldiers are manning a gun emplacement at the entrance. He falters for a moment. How can he go in there? But there is no choice. No one questions him as he passes by.

The place is packed with people waiting to be evacuated. A stench of sweat hits him like a fist. Frightened people jammed together on the platform, in the waiting rooms, the canteen, the ticket office. Jammed black-hole tight. The stink of their bodies, suddenly isolated from all the other stinks of India, is shocking. One attar note smelt raw on a perfumer’s glass rod, nasty and unblended. Pran has been taught the rhyme. Fee-fi-fo-fum. Be he alive or be he dead. This is the smell of Englishmen, an incitement to the mob, the ogre, to attack. They are mostly women and young children, and they must have been camping here for days. Each family group has demarcated its little patch of floor, sometimes using improvised screens of rugs and bedlinen to separate them from their neighbours. As if propelled by instinct, by the European’s animal drive to segment the world, to grid and order space. Every family’s own little pink territory, drawn on the map of Amritsar Railway Station.

They look haggard and wretched. The children hang limply about their tight-lipped mothers, whose grimy faces seem at first sight to be masks of defeat and worry, the grinding effect of hours and days of dehydration and poor sanitation and constant fear of death. But seen closer the women’s eyes are bright. Underneath the dirt something in these memsahibs has been elevated by their plight. It connects them to history, to their grandmothers of the Mutiny, to the symbolic destiny of Englishwoman in tropical climes, which is to make do, to endure. They are becoming the angels their husbands imagine them. Sacred. Worth spilling blood for.

These women frighten Pran almost as much as the soldiers guarding them. He is a trespasser, a black cuckoo in the nest. He tries to make himself as inconspicuous as possible, acutely aware that there are no other boys of his age present. The real English boys are all away in boarding schools at Home. Some of the women start to watch him, visibly sifting through their memories, trying to place his face. Each time he spots someone fixing on him, he moves, takes up position elsewhere. For a long time he stands beneath a peeling poster. Visit Bombay. The Gateway of India.

Hari Kunzru’s The Impressionist follows the experiences of the chameleon-like protagonist, Pran Nath, who, in finding himself in different social and often colonial situations, alters his persona in order to remain undetected, again and again occupying the position of an invisible historical imposter. Pran is the child of an Indian mother and English father, conceived under extraordinary and coincidental circumstances. His protean qualities are reminiscent of Rudyard Kipling’s titular Kim, but he also resembles Virginia Woolf’s Orlando, passing through different phases of colonial and postcolonial Indian history in the course of the novel, including the Jallianwala Bagh massacre, and political intrigues in the Nawab’s court at Fatehpur. He participates in middle-class British society, attending a prestigious boarding school and Oxford University, and thus draws attention to arbitrary social discriminations that allow him, as a white-passing colonial, to integrate into society, but not his Jewish communist roommate, Gertler. Pran later contributes to the field of anthropological research, inadvertently encouraging the propagation of Professor Chapel’s beliefs of white supremacy with regard to the fictitious Fotse tribe. It is at this point, having experienced anxiety regarding his position as a colonial subject who has passed for white, that Pran faces the reality that his processes of shape-shifting have forfeited his right to a true personal identity. 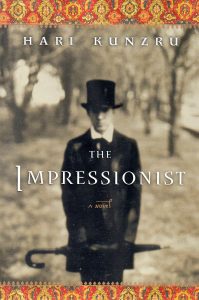 Kunzru establishes Pran’s status as at once an insider and yet an outsider throughout the novel, as with the powerful scene of his entrance into Amritsar. Having fled Fatehpur, after being fetishised for being white-passing, Pran uses this knowledge to his advantage in order to navigate colonial India and carve out a space where he can exercise his autonomy. In the novel, the city has recently experienced the Jallianwala Bagh massacre of 13 April 1919, when hundreds of Indian civilians were shot and killed by British troops under martial law. Pran enters the ghost town, which is guarded by British soldiers whom he evades by feigning a British accent, and then proceeds to the train station where white colonials are waiting to be evacuated. Kunzru describes Pran’s entrance as ‘Walking into whiteness’ (p. 187), suggesting the impermeability and absoluteness of ‘whiteness’ as an almost palpable space distinct from the spaces inhabited by others. This tangibility extends to an individual’s body odour, where ‘the stench of sweat hits [Pran] like a fist’ (p. 187). Pran responds by invoking the rhyme ‘Fee-fi-fo-fum’ from the fairy-tale ‘Jack and the Beanstalk’, which posits an inextricable link between an Englishman and his scent ‘be he alive or be he dead’ (p. 187). However, Kunzru inverts the rhyme’s meaning so that it serves as a reminder to Pran of his own vulnerability in the face of ‘the mob, the ogre’ (p. 187), the crowd of white colonials crowded in the station. He is conscious that he does not possess the ‘smell of Englishmen’ (p. 187) and will eventually be caught out as he advances through the packed station. Despite this sense of foreboding, ‘[n]o one questions him as he passes by’ (p. 187) because his light-skinned appearance allows him to pass as white. It is one of the novel’s most dramatic illustrations of what it means to pass racially.

The dissonance between Pran’s inner self-consciousness and his outer appearance is clearly captured in his relationship with Astarte. He cannot understand why she would eschew the privileges of a white middle-class British woman to be with a black man, citing ‘European degeneration’ (p. 358). He is also is disorientated when she reprimands Jonathan for being ‘so English’ (p. 407). In this way Kunzru offers a subtle commentary on what it is to be an immigrant in the UK today. Even when Pran for years seamlessly assumes the identity of Jonathan Bridgeman, he still feels like an imposter in his own body. In the Amritsar train station, Pran is also described as ‘a trespasser, a black cuckoo in the nest’ (p. 188). As a person of mixed race, he is vulnerable, and yet a threat to ‘real English boys’ even though they look quite similar (p. 188). Pran’s appearance and very existence blur the lines between coloniser and colonised; his presence disrupts the hierarchy which places the white coloniser as superior by suggesting its artificiality.

The scene in the train station is also a critical microcosm of British imperialism. Each colonial family has ‘demarcated its little patch of floor’ using rugs and bedlinen, ‘[a]s if propelled by instinct, by the European’s animal drive to segment the world, to grid and order space’ (p. 187). Even in a position of vulnerability and utter destitution in a transitory space there remains a powerful compulsion within the coloniser to exert power over their surroundings. The narrator’s observation that each family has their ‘own little pink territory’ (p. 187) recalls that British territory were marked as pink on colonial maps. This, paired with the home furnishings used to demarcate each family’s territory, draws attention to the arbitrariness of the imposition of colonial rule and colonial hierarchies. Similarly, British imperialism and also British society are accepting of the protagonist in his form as Jonathan Bridgeman, but not as Pran, Rukhsana or Pretty Bobby.