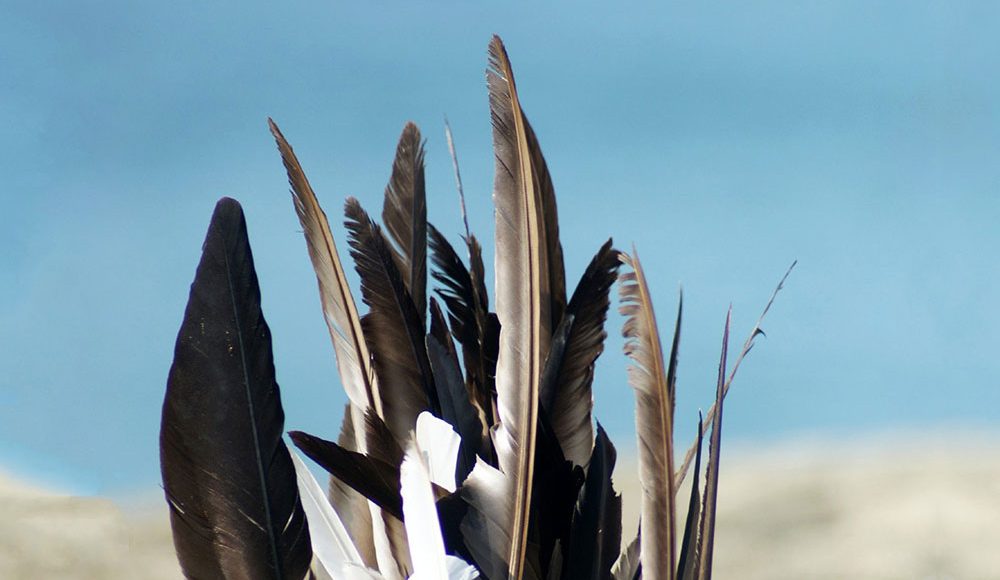 Reading Vahni Capildeo’s ‘Fire & Darkness: And Also / No Join / Like’

The poem is from the collection Measures of Expatriation (2016).

O Love, that fire and darkness should be mix’d,
Or to thy triumphs such strange torments fix’d!

A northern street: the temperature of the ungovernable. The proud hooded stride. The skill to add up stone: cold – outlasting. The wealth of the land: stone. Kindness: the harsh kind. For each question, a better question. For each better question, one answer. For each good question – that’ll do. Not fussed.

In the south of this country, five times I have attended the celebrations that they hold in the dark of the year. Many centuries ago, there was a man whose name was Guy, or Guido. He practised a different, competing version of the national religion. He tried to explode an important government site. These buildings are still in use. You can visit the place, which is on the river. Some of the children who ask for money on British streets are simply trying to fund their construction of effigies of this hate figure, whose burning on public and domestic pyres on the so-called ‘Bonfire Night’ (5 November) has become a popular ritual. Fireworks are let off; it is legal to purchase them for your own festivities.

A northern street, uphill. It branches, like a Y, a peace sign, water coursing round an outcrop; like – part of the net of a tree; like – It branches in two. Upon the slope held between the branches stands a sooty church, now in use as a nightclub. This pale and brisk morning glances on the metal railings.

Who is he, between the fence and lamp post?

Nobody. A hat stuck on the railing, abandoned by a tidy drunk. A feeble visual joke. Nobody’s head, nobody’s, supports a hat drooped at that angle.

It is a guy. A Guy Fawkes guy. The students left him there: lad for the burning: unreal, it has to be unreal. Check out this guy.

I have to cross the road, so I do.

The ordinary-looking foot is wedged between the base of the fence and the lamp post. The left arm, bent at the elbow, has been tucked deep into the jacket pocket, toneless. It is not a bad face. The eye is the pity of it: tender lids tightened into a crescent, as happens with mortally wounded birds; infolding, no longer able to yield, a turning inwards of the ability to
light up.

I put my hand into my pocket, for my phone.

It is not necessary.

Pale and brisk as this morning, the police car slides into my peripheral vision.

A street in Trinidad: the soft, brown ‘ground doves’ have the same manners as the pedestrians. Unhurried, they traipse along in front of cars. Why did the ground dove cross the road? I don’t know, but it’s certainly taking its time.

The exception came plummeting out of the recessive sky, into the back yard’s concrete rain gutter. Had a neighbourhood boy felled it inexpertly? Had the ecstatic efficiency of its heart thumped to a stop? It lay there, the softness, and would not, could not bestir itself.

The child strewed it with yellow and scarlet wild lantana flowers, thinking of burial, accustomed to cremation; feeling a sudden fear. The parents took it all away.

And when the dove was gone, another came plummeting the same way; the riddle repeated – to be moved, moving, and never to move. Love or some other force was identical in the equation.

We brought few friends home who were not already part of at least a two-generation family circle. We brought few friends home. This time my brother had introduced a soft and brown and tallish young man in his early twenties, who weighed not much more than a hundred pounds. By historical pattern, not personal choice, in our secular Hindu household, this was the first Muslim friend our age.

Perhaps it has changed; but non-Indo-Caribbeans used not to be aware that ‘Ali’ and ‘Mohammed’ are not ‘Indian’ names. And in that unawareness they are linguistically wrong, but more profoundly right: for our ancestors brought over a shared Indian village culture, over a century before the creation of Pakistan in the Indus area made such a difference. And in that Trinidad remote from Trinidad’s Trinidad, and nonetheless most mixed and Trinidadian, a lunatic reverberation was set up by the 1947 Partition – some third-generation immigrant families briefly fought according to the lines of what had not been a division. In lands far away, current events were indirectly regenerating or inventing this part of Trinidad’s past also. By 1990, we knew that there must be some difference.

We sat on the nice imported sofa with the delicate novel unicorn visitant who looked just like us.

All over the island, every evening just before seven, telephone calls were wound down, fires turned low beneath pots, and families converged on the television set to listen to the news headlines: a link with the greater world. Nothing was expected to happen.

A square, reliable face showed up.

‘The liberation of Kuwait has begun.’

The look of devastation and betrayal on our guest’s face was like nothing I could have imagined seeing. An outline seemed to be sitting in his place, while the person who had occupied that outline crumbled.

Why? Televised missile fireworks were going off, white and purple. What had so upset him?

We are not evolved to cope with aerial threats. To witness the spectacle of bombing is to feel guilty and due to be wiped out; for all our gods inhabit the heavens, and to be safe our earliest kind might have taken to the trees, where only the gods could smite them. To be bombed is to be smitten by the wrath of a Deity not to be located and not in our image. To ascend into Heaven becomes profoundly and secretly inconceivable; for the borders of the heavens are guarded with fire.

Was this what our friend was seeing? The starring roles in war, in our young memories, hitherto had been for people who did not look like us. Or was he seeing war upon his religion?

From now on, anyway, in the world’s play of representations of the living, we would look more like the killed. We would resemble like it or not – anti-advertisements for flourishing societies; which is perhaps why people on the street in the south of England have told me that they have no money, or have offered me money, when I have said nothing or when I was about to ask for directions and certainly have not had a guy to burn.

Our soft brown young man sat, and sat, until he could get himself home.

On the selection of this text for Best Collection, Chair of the 2016 Forward Prize panel Malika Booker noted that Vahni Capildeo’s Measures of Expatriation (2016) captures what it is to inhabit liminal spaces. These non-physical spaces, which Capildeo refers to as the ‘elsewhen and the elsewhere’ that a traveller holds in their heart, contribute to the third space through which the expatriate navigates their multiple worlds. As with her earlier work, Measures of Expatriation deals with themes of diaspora, dislocation, relocation and the fluidity of identity. Capildeo imbricates qualities of language in identity, arguing for the necessary fluidity of each. Commenting on the collection, Booker writes, “When people in the future seek to know what it’s like to live between places, traditions, habits and cultures, they will read this. Here is the language for what expatriation feels like.” 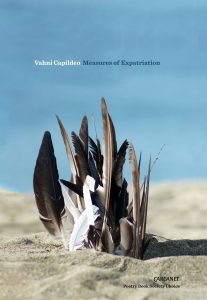 The collection is divided into seven parts, or measures (as per the title). Its strength lies in the prose-poems that trace the stories of unnamed characters, acquaintances and perhaps the poet herself, as they all move across continents, islands and meet in the in-between places such as on trains and on streets. Sandeep Parmar notes that, “Working across adopted voices and loose poetic forms, Capildeo’s prose-poems are where her forceful intellect is at its most staggering.”

The third poem of the first measure, ‘Fire & Darkness: And Also / No Join / Like’, offers an example of the way in which Capildeo uses this ‘loose poetic form’ in a prose-poem to create narratives that inscribe the fluidity of identity in the vocaliser’s experiences of new places and remembrance of old memories. Following the previous four pages of intersecting narratives in the poem, the final seven lines of the poem capture the simultaneity of multiple identities and the speaker’s complex responses to disaster and othering:

These final lines connect the previous five parts of the poem. Each of these sections tells a different part of the same story, tracing the speaker from their present and recent past in England, back to their youth in Trinidad where they watched the 1990 invasion of Kuwait on television:

In these few lines Capildeo captures a young Trinidadian’s response (perhaps her own) to the bombing of innocents, and refers the reader to contemporary concerns about the politics of media representation, the live broadcast of a war motivated by oil-hungry imperialism, American propaganda and the grievability, or lack thereof, of brown bodies ‘being killed from the air’.

Narratologically the poem manipulates both the implied and actual reader, thereby implying the fluidity of the reader’s own identity and positionality. It begins with an epigraph by John Donne that assumes the reader’s familiarity with classical English poetry but then explicitly decentres the familiar by constructing English traditions as strange. On Guy Fawkes Night, the speaker locates themselves as an outsider when explaining the origin of the tradition: “He tried to explode an important government site. These buildings are still in use. You can visit the place, which is on the river” (3). Here they imply another kind of reader, one that perhaps knows Donne, but not the significance of the fifth of November or the location of the Houses of Parliament. The poem then shifts to Trinidad, the invasion of Kuwait on the television, and their new Muslim friend stunned by the violence shown, before it returns to England, where the speaker is othered, treated poorly or offered money when they stop to ask for directions. Whomever this prose-poem is for (perhaps all of us), is offered a sense of multiple identity strands conjoining in the memory of past historical events impacting on the speaker’s complex and fluid experience of the world and their place in it.

Parmar, Sandeep. ‘Measures of Expatriation by Vahni Capildeo review – ‘language is my home’’. The Guardian, 19 February 2016. Accessed on 14 November 2017 from https://www.theguardian.com/books/2016/feb/19/measures-of-repatriation-vahni-capildeo-review-poetry-collection