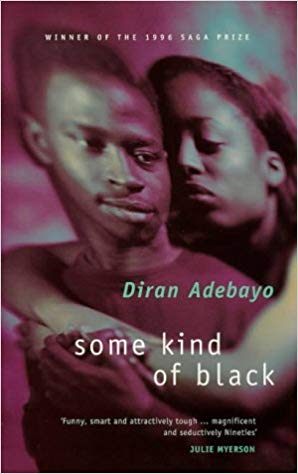 Close reading of Diran Adebayo’s Some Kind of Black

No Justice – No Peace

How Many More Of Our Sisters Must Fall?

You are invited to the first open meeting of the Dapo Defence Campaign.

X amount of people from various organisation had turned up at Dele’s door, but he had turned them away. However, an SWP-affiliated group had had the fortune to pass by the morning Dele’s resolve had changed.

“Just recount the incident. Tell it like it was and say what we can do for her now,” they had soothed, and Dele had finally nodded wearily.

Now it came to it, he didn’t really feel to talk today. But at least he was out of the house, and Dapo would probably have wanted him to do it.

The White Rose was a grimy red-brick Edwardian building with a cavernous, cold, central space. On his previous visits there he’d been dragged, kicking and screaming, to Nigerian community events: engagement and Christening dances, Businessman of the Year (import and export). And what with the forty-something women in traditional dress and tremendous, unapologetic, backsides bouncing up and down to highlife, he had felt something of a generation gap.

So the omens weren’t all that as he shuffled into the hall. As SWP apparatchik gave him the once-over. He was tardy, so she was testy, before she ushered him on to the podium.

Dele took a seat beside the speaker, an early thirties guy in black NHS spectacles. He was exhorting the one hundred and fifty-strong audience to trace the lines between the Dapo tragedy, the rise in racial attacks in the capital, and the threats posed to them all by a single Europe. This must be Chris Collins, the SWP’s great black hope.

The women shifted their buttocks periodically, and the men sat, legs splayed, arms folded, stony-faced. They had come for bloodand fire, not Maastricht. Dele searched for familiar faces, but got lost in a great sight of blackness. He felt brutally exposed on the podium, a virgin in front of this black gaze. Sure, he knew his way around certain flavours. But this was different. He had no crutch and this was serious shit. He hadn’t paid his dues here at all. His only legitimacy lay in his being the brother of an unconscious woman.

Published in 1996, Diran Adebayo’s Some Kind of Black tapped into the zeitgeist of Black British writing of the closing years of the twentieth century. This novel reflects the preoccupations of many similar authors such as Bernadine Evaristo, Hanif Kureishi, and Andrea Levy (McLeod, 2013: 169). The varied Brixton vernaculars of Jamaican, Nigerian, and other Black British characters are mixed with standard English in both the dialogue and prose of the novel. Through this code-switching, Adebayo complicates the black identity of his protagonist Dele, resisting tropes of the victim-protagonist. James Procter notes that Dele’s identity is complicated beyond “[e]xploiting his ethnicity in order to take advantage of his white middle-class peers”. He is forced to consider his commitment to liberatory race politics in the aftermath of an experience of police brutality, which leaves his sister in a coma. 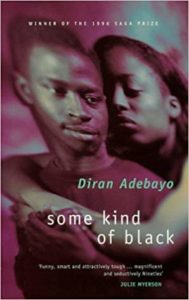 Dele grows up over the course of this Bildungsroman, though the political questions he faces throughout are never fully resolved. John McLeod notes that Black British writing in the 1990s “was often preoccupied with the construction of a new form of subjectivity which challenged racially exclusive and prejudicial notions of national identity and belonging” (169). Dele’s introspective interrogation of his location and sense of belonging, or lack thereof, within the black community begins in the above extract. The young man is asked to speak at a political event piggy-backing on his sister’s hospitalisation in order to promote political agendas within the Brixton community. At the “No Justice – No Peace” meeting Dele experiences a severe dislocation from the black British community, getting “lost in a great sight of blackness” (86).

This extract is taken from Chapter 5, entitled “Welcome to the fold”. In it, Dele is recovering from the torture he suffered while imprisoned in the back of the police van. He was arrested without due cause by Brixton police who had targeted his friend Concrete, whom they presumed to be involved in organised crime. During the arrest, Dele and Concrete are tortured while his sister Dapo is beaten. The police presume Dapo is in the grip of a cocaine high and slap her around to bring her to consciousness. This beating triggers a sickle cell crisis and Dapo falls into a coma.

Members of the Socialist Workers Party (SWP) convince Dele to speak at their event, absorbing his sister’s trauma-triggered coma into their political rhetoric. He has been resistant to becoming embroiled in the political agenda due to his middle-upper-class education and lifestyle back in Oxford. Once at the event, Dele finds himself dissecting the community, derisively noting the shapes of the middle-aged women’s bodies and recalling his own reluctance to attend Nigerian community events when younger. His derision reflects his changing attitudes rising from his education and the hybridity he must begin to negotiate between his Brixton upbringing and Oxford.

He notes the community’s unease with the political rhetoric of “the SWP’s great black hope” (87), signalling his scepticism about the politician’s message and its efficacy: “they had come for blood and fire, not Maastricht” (87). The title of the novel points to his discomfort. Dele identifies as “some kind of black” because of the contradictions he confronts, and these are also encapsulated in his relationships with women of different races. Dele begins to work through these core tensions on the podium of the rally that is ostensibly for his sister and feels “brutally exposed” (87).

McLeod writes of the late 1990s and early 2000s period of contemporary British fiction that “the insistence on dwelling in the UK and forging a robust black British identity, for both self and society, was of fundamental importance to the literary endeavours of black British writers who were often operating in a deeply prejudicial social milieu” (169). Adebayo’s work certainly dwells on what it is like to be black in the UK, but he engages in the conversation about identity with greater complexity, refusing to articulate any kind of homogeneous identity. Despite his misgivings about the politicisation of his sister’s disease and trauma-triggered coma, Dele understands the need for solidarity in the face of rising racial violence and police brutality, and this extract signals a political turn in the novel. From this point on Dele is “forced to assess the relationship between the liberatory role-playing in which he has been indulging and a more militant Black politics” (Procter, 2003: n.pg).

Sitting on the podium, Dele is uncomfortable in front of the community and feels like “a virgin in front of this black gaze” (87). The “black gaze” refers the reader to another thematic concern in Adebayo’s work in which he writes against any presumption of a monolithic black culture. Dele is able to distinguish the constituent groups: he “knew his way around certain flavours,” but feels unprepared and ignorant in the face of this “serious shit” (87). Adebayo uses vivid imagery to allude to the cultures of the myriad Black British identities in Brixton, as well as the distinctions between them. “Flavours” conjures the culinary cultures of Africa and the Caribbean, and the plural also implies the cultural differences between the groups.

The protagonist’s scepticism about the construction of a homogeneous community of black British people subtly intersects with a racial politics that demands group action and cohesion. Dele’s hybridity and blossoming politicisation are particularly marked in this section. While his diction implies his location in diverse cultures, he nonetheless casually references Maastricht in the context of the anti-European discourse of the rally. For Dele to be properly involved in politics he feels he must “pay his dues”, referring to his hitherto non-existent activism. This extract marks the moment at which Dele’s political convictions begin to shift and concretise as he develops a more robust sense of self in relation to the Black British communities of which he at the same time forms an integral part.