Motherhood and Mother Tongue in Sarah Howe’s “Crossing from Guangdong”

“Crossing from Guangdong” from Loop of Jade (Chatto & Windus, 2015). Watch Sarah Howe read the poem, or read it yourself in full.

For Sarah Howe, the English-speaking daughter of an orphaned Chinese mother, the themes of motherhood and mother tongue are inextricably linked. A narrative poem in Loop of Jade, “Crossing from Guangdong”, explores the relationship between language, family, and cultural identity. Howe examines her relationship with Hong Kong by reimagining her mother’s childhood there. At the same time, she recognises that her inability to understand Cantonese, the dialect of Hong Kong and her mother’s native tongue, limits her ability to engage with her birth city. In “Crossing from Guangdong”, the speaker’s fragmentary relationship with the Chinese language represents the incompleteness of her search for her Chinese identity, while also repositioning the family narrative as circular instead of progressive. 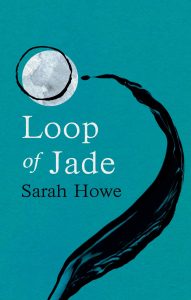 “Crossing from Guangdong” foregrounds the relationship between motherhood and mother tongue: Howe establishes a parallel between her bus journey from Guangdong to Hong Kong as an English-speaking adult, and the same journey taken by her mother as an infant. The poem is narrated in the first person by an adult woman assumed to be Howe. When she “[c]ounts out change in Cantonese”, Howe notes that her knowledge of the dialect is reduced to single-digit numbers, “Yut, ye, sam, sei”, as “scraps that stay with [her]” (3). The simile of counting “like a baby” establishes a parallel between the speaker and her mother. Howe reinforces the comparison when remarking to her mother that she has embarked on “the same journey you, a screaming / baby, made, a piercing note among grey, huddled shapes, some time in nineteen-forty- / nine” (5). The comparison frames the speaker as an orphan child like her mother, rootless and innocent. As Howe explains in an interview with Tammy Lai-Ming Ho, her mother had decided not to teach Cantonese to her children, as she was concerned that bilingualism might negatively impact their English skills (Ho 44). Yet “Crossing from Guangdong” suggests Howe’s lack of Cantonese skills is what keeps her in a childlike state. Fluent in English, she nonetheless feels “like a baby” upon her return to Hong Kong. Unable to understand the cultural signifiers embedded in the Cantonese dialect, she is hindered from learning about Hong Kong’s culture through verbal communication.

Throughout her bus journey from Guangdong to Hong Kong, Howe actively imagines familial relationships with the Chinese strangers she encounters. These imagined relationships simultaneously reveal the range of possibilities for familial connections, as well as her cultural and linguistic distance from the Chinese locals. Howe’s moments of “half-recognition” are made more poignant by her lack of knowledge about her mother’s biological family. Meeting a friendly old woman on the bus, Howe muses that the latter “could have been [her] unknown / grandmother, for all [she] knew or understood” (4). This imagined relationship indicates Howe’s desire for an understanding of her maternal lineage. While Howe assumes that the old woman is “doubtless just inviting a foreigner to dinner”, her lack of maternal family opens up a possibility of a direct family bond (4). However, unable to understand the old woman’s speech, Howe fails to communicate beyond gestures and speculation. In spite of her display of affection, the old woman’s intentions and Howe’s speculations remain a mystery to each other, preventing the option of a dinner visit or other form of acquaintanceship. Howe’s relationship with her mother and mother tongue presents a paradox. On the one hand, her physical characteristics allow locals to identify her as visibly Chinese like them. On the other hand, her lack of knowledge in Cantonese emphasises her position as a stranger.

The tone in “Crossing from Guangdong” is at once regretful and hopeful, expressing a longing for cultural recognition that can only be partially achieved. The poem concludes on a cautiously hopeful note in which Howe finally recognises a direct relationship to Hong Kong, while registering how the city has changed in her absence. She begins her journey “try[ing] to imagine [her mother] as a girl” in Hong Kong, but as the bus crosses into the city, she recalls personal memories from her own childhood. By realising, “The rising mercury / pin-tips” of skyscrapers are “[s]o much / taller now than when I left / fifteen years ago” (4), Howe reclaims Hong Kong as a space that she had once inhabited, establishing a connection to the city through herself instead of her mother. The poem closes with her reflection:

The low-slung ferry, white above green,
piloting the harbour’s carpet of stars,
turned always home, you can no longer see. (4)

Tammy Lai-Ming Ho argues that Howe is acknowledging Hong Kong as a “place of permanence” (45), being “always home” despite her years apart. Yet the following phrase “you can no longer see” adds ambivalence to her reclamation of cultural belonging. The poem ends not with a clear resolution on Howe’s place in Hong Kong, but with an acknowledgment of the city as a space of constant change. Since leaving Hong Kong at the age of seven, Howe has visited regularly every few years. Her constant returns disrupt the idea of a linear narrative of departure or return, instead framing her search for home as the continuation of a cycle.

Overall, “Crossing from Guangdong” introduces the theme of circularity and cyclicality that looms large throughout Loop of Jade. The image of a circle is evoked in the volume’s title, “Loop of Jade”, which refers to a jade bracelet bought for the infant Howe by her adoptive grandmother (18). The idea of circularity suggests that a person’s cultural identity is an ongoing journey without a fixed beginning or end, one that exists both within and without the framework of familial relationships. By framing her journey to Hong Kong as part of a cycle, Howe subverts the expectation that family histories must progress in linear narratives. Instead, “Crossing from Guangdong” shows how Howe’s relationship with Hong Kong draws from a hybrid of childhood memories and imperfect reconstructions of her mother’s stories.