Born in Nigeria in 1984, Helen Olajumoke Oyeyemi moved with her family at the age of four to Lewisham in South London. An imaginative and introspective child, Oyeyemi struggled with clinical depression throughout her school years, finding comfort in reading, writing and rewriting her favourite stories. At 18, Oyeyemi began work on her first novel, The Icarus Girl (2005), which was published while Oyeyemi was a social and political sciences student at Corpus Christi College, Cambridge. Since leaving Cambridge, Oyeyemi has lived a peripatetic life in Paris, Toronto, London, Berlin, Budapest, and Prague, among other global cities. She is the author to date of five novels, two plays and one short story collection, and is currently a writer in residence at the University of Kentucky.

Oyeyemi […] has proved herself capable of winning over readers with word-spells that continue to surprise and unsettle. 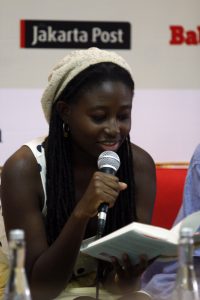 Helen Oyeyemi – The Exoticism of Others, Ubud Writers & Readers Festival 2012, Stanny Angga (CC by 2.0) via Flickr

In an interview for NPR, Oyeyemi has described her works as having different personalities: The Icarus Girl is ‘startled, wide-eyed’; Mr. Fox (2011), her fourth novel, ‘playful, romping around.’ Yet while Oyeyemi’s oeuvre is certainly shape shifting, metamorphosing alongside the writer in her turn from wide-eyed teenager to self-assured auteur, it reveals remarkable obduracy in the themes that it explores. The Icarus Girl marshals Yoruba folklore and specifically the image of the twinned abiku to investigate what Brenda Cooper sees as ‘contested citizenship,’ the twoness in oneness, of the migrant person. Similarly, her second novel, The Opposite House (2007), serves up a symbol of life lived ‘in between’ in its central conceit of a mythical ‘somewhereshouse’ with doors that open onto Lagos and London.

In essays, Oyeyemi has recounted childhood experiences of being bullied, called a ‘jungle bunny’ by her peers. Yet it would be a mistake to see Oyeyemi’s dislocation as experienced – and examined – along cultural and racial vectors only: many of her works also give space to wounded female matrilineages and the various ways in which, as Oyeyemi puts it, ‘women disappoint one another.’ Indeed, at least two of her novels, White is for Witching (2009) and Boy, Snow, Bird (2014), borrow in increasingly focused ways from the Grimms brothers’ story of ‘Snow White’,’ imagining (step)mother against daughter, sister against sister, heroine against self. To be sure, Oyeyemi draws as often from European folklores as from the oral traditions of West Africa. Deploying these, she returns repeatedly to themes of disruption in the 21st century: lost homelands, fractured selves, dissolving bonds, cycling oppressions, emerging ways of thinking, feeling, being. It is fitting to see her as a pioneer of what of Porochista Khakpour has termed the ‘multicultural’ – and I would add, gendered – ‘Uncanny frontier.’