It’s just a difficulty in even knowing where I am at any given time: Helen Oyeyemi’s travelling fictions

One of the better-known biographical facts about Helen Oyeyemi is that she does not stay still for long. She made her first move at the age of four, when her family left their home in Ibadan, Nigeria, for London. Since then she has lived in cities across the world, including Paris, New York, Budapest, Berlin, and Prague, in addition to a stint as a writer-in-residence in Lexington, Kentucky. Oyeyemi’s peripatetic lifestyle, as well as the notion that acts of reading and writing can transport us, informs her fiction, which undertakes its own eclectic journeys through space and time. Her debut novel, The Icarus Girl (2005), is set between London and Ibadan. Subsequent novels are set in London and Lagos (The Opposite House, 2007), Cambridge and Dover (White is for Witching, 2009), 1930s Manhattan (Mr Fox), and segregation-era New England (Boy, Snow, Bird, 2014). 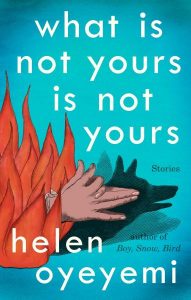 The short stories in her collection What Is Not Yours Is Not Yours (2016) are set in various parts of England and Europe, including the Montserrat monastery in Catalonia, Spain. Travel features in Oyeyemi’s non-fiction, too, most prominently in a recent essayistic ‘travelogue’ documenting aspects of her life in Prague.

Oyeyemi’s journeys, actual and fictional, are often disorienting. She once explained to an interviewer, ‘I find it quite hard for the place I’m physically in to make a dent on my mind […] It might actually be because I read so much that I’m already in other places, so it’s just a difficulty in even knowing where I am at any given time’. Her favourite place to work is not really a place at all: she writes best in transit – especially on planes and trains – because as she puts it, ‘You’re in motion and so are your characters’. The feeling of disorientation, or at least that of constant movement, extends to Oyeyemi’s readers. In an essay on Oyeyemi, David Punter writes, ‘When approaching a novelist, it would be good to feel that one had a clear grasp on her work; no doubt this offers a kind of stability, a sense of knowing where one is coming from and where one is going to’. But, he continues, there is something about Oyeyemi’s work that prevents us from feeling ‘anchored’ within it. Punter explains that this ‘sense of disorientation’ stems, in part, from Oyeyemi’s treatment of subjectivity. Her characters are haunted by strange presences that are both within and without them, and, as a result, her writing collapses the ‘boundaries’ between self and other.*

To Punter’s analysis I would add that feeling lost in Oyeyemi’s oeuvre, not knowing where we are coming from or going to, also has much to do with the way she writes – or, more properly, doesn’t write – about place. She tends to refrain from offering the kind of ekphrastic (that is, vivid) descriptions of setting that would otherwise help to orient the reader in a work. For example, the secret rose garden that is central to the plot of the short story ‘books and roses’ is presented as a ‘walled garden overrun with roses’ full of ‘pale blue butterflies’, a ‘tangled shock of a studio’ ideal for an artist experimenting with colour. Although this description gives us a vivid impression of the garden – bright, warm, alive – it says little about its topography and dimensions, and thus does not give the reader the detail needed to navigate it in their mind’s eye. 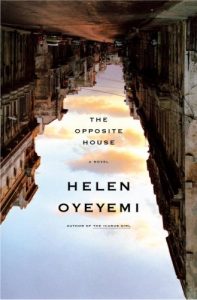 Similarly, the setting of The Opposite House is beguiling but intangible. In it, Oyeyemi weaves together components of magical realism, the Afro-Caribbean religion Santería, and the cities of London and Lagos to create the eerie ‘somewherehouse’, a space occupied by deities with an infinite number of rooms, some ‘no more than fancies, sugar-cubed afterthoughts stacked behind doorways’. This is a place of ‘fancy’, of imagination, that knows no architectural or, indeed, inter-cultural limits.

Oyeyemi’s fiction encourages, even demands that we lose ourselves in it. It disrupts spatial and geographical coherence as much as it disrupts coherences of narrative, time, and character. She is less interested in place per se than in the impact of places (countries, cities, villages, gardens, buildings, rooms) on emotional life. Her writing raises a set of interrelated questions: what happens when we leave somewhere familiar for the unknown? Will we be changed forever? What are the consequences of trying to go where we don’t belong? Do places have lives of their own, and, if so, what are the means by which they can express themselves?

Cite this: Din-Kariuki, Natalya. “It’s just a difficulty in even knowing where I am at any given time: Helen Oyeyemi’s travelling fictions.” Postcolonial Writers Make Worlds, 2017, [scf-post-permalink]. Accessed 28 January 2022.