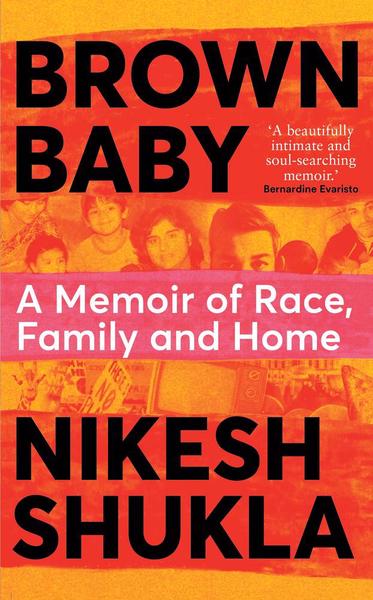 ‘The freezer is empty.

There is nothing there. A bag of frozen peas, frosted over with age.

I open one and am met by a familiar smell. It’s Mum’s food. Some bhaijas. And another container, this one has sweetcorn kadhi in it.

The smell is so soothing. I can practically feel the coarseness of the cumin seed between my front two teeth. I don’t know what to do. There I am, in her kitchen, holding her food, clutching it like a second chance.

Molly Wizenberg observes that ‘food is never just food’. Rather, ‘it’s also a way of getting at something else: who we are, who we have been, and who we want to be’. This observation on the inherent importance of food to personal identity is pertinent in Nikesh Shukla’s writing, and in particular his memoir Brown Baby (2021).

Like many British Asians, food signals Shukla’s connection to his Indian identity, reminding him of the region his mother came from, and to which she was returned only after her death in 2010. His memoir is addressed to his five-year-old daughter Ganga, named after the river Ganges that flows through India and Bangladesh, in which Shukla scattered his mother’s ashes. Shukla observes that ‘food is home and home is what I yearn for’ (67). In this instance, home not only refers to Shukla’s mother but his homeland, as the loss of his mother’s cooking severs an important connection to his South Asian heritage. Food signifies both his Indian background and a sense of belonging he yearns for in Britain, a country where he often feels marginalised. Food is an integral part of a nation’s culture, reminding migrants of what is lost in diaspora, and now remains irretrievable, like those who have passed away.

The connection between food and Shukla’s Indian background is particularly prevalent in a scene where he visits his parents’ house, soon after his mother’s death. There, he discovers her leftover bhaijas and sweetcorn khadi in the freezer. When he defrosts this food, the ‘kitchen swells’ with the smell, which is ‘like a swirl, a whisper, a groan, a warmth’ (76). His vibrant description of her food at once leads his memory back, and challenges prejudices associated with Indian culture in Britain. Earlier in the memoir, Shukla observes how the smell of curry is often used to mock South Asian people. He recalls how his mother ‘forced me to change out of my school uniform the second I got home […] because the last thing my mum wanted was for my clothes to smell of her cooking’ (15). Krishnendu Ray has identified ‘white resentment of the smell of Asian food, and of Asians themselves’, noting that this applies ‘to public and private life alike’. Shukla’s mother recognises this resentment and seeks to protect her child from it, both within the home and out in public. Despite her caution, Shukla is still bullied for his ‘shit skin’ by fellow pupils on the playground (20). He reflects how he ‘remember[s] the conflation of shit and curry only too well. Brown curry, brown poo, brown skin’ (15). The juxtaposition between food and ‘shit’ emphasises the illogical nature of racism in that a form of sustenance is deemed akin to waste. This flashback exemplifies how components of South Asian culture, which are turned to as sources of comfort in the private realm of the home, often become targets of abuse in public.

However, the adult Shukla dismisses this prejudice, and thereby aims to negate its power. He now considers his mother’s worries to be ‘laughable’ as ‘we all know, curry smells delicious’ (15). This pride in the food of his homeland is reaffirmed after he encounters the smell of his mother’s cooking a final time. He yearns to ‘bottle and spritz it on myself and call it my signature scent’ (76). The use of the word ‘delicious’ and the metaphor comparing the scent to perfume repackages South Asian culture as something luxurious as well as comforting. Shukla rebrands Indian culture as desirable rather than something shameful. His longing to wear his family history as his ‘signature scent’ emphasises his desire to present his culture as a key component of his public identity. Unlike his mother, he seeks to flaunt his Indian heritage in defiance of bigotry and racism.

The Proustian importance of smell and taste in reawakening past memory is further highlighted when the scent of bhaijas and sweetcorn khadi is enough to momentarily resurrect Shukla’s mother’s presence. He frequently refers to his mother as ‘frozen’ in an argument he had when he last saw her (9, 158). The act of defrosting the food compares the revival of Shukla’s mother to cryonics, the practice of freezing deceased bodies in the hopes of reviving them in the future. The personification of the kitchen ‘swell[ing]’ with the scent of his mother’s food evokes imagery of pregnancy, signifying her momentary rebirth, as the ice that preserves her memory is thawed. This emphasis on life contrasts with the ‘shit’ that the playground bullies associated Indian food with. Bhaijas and sweetcorn curry instead become a reinvigorating vessel, returning Shukla back to more comforting times (75).

Indian food and culture, and its sight, smell, and taste, are removed from the notion of being offensive and instead reconfigured as extraordinary. Through finding his mother’s food, Shukla rediscovers pride, solace, and comfort in his heritage.