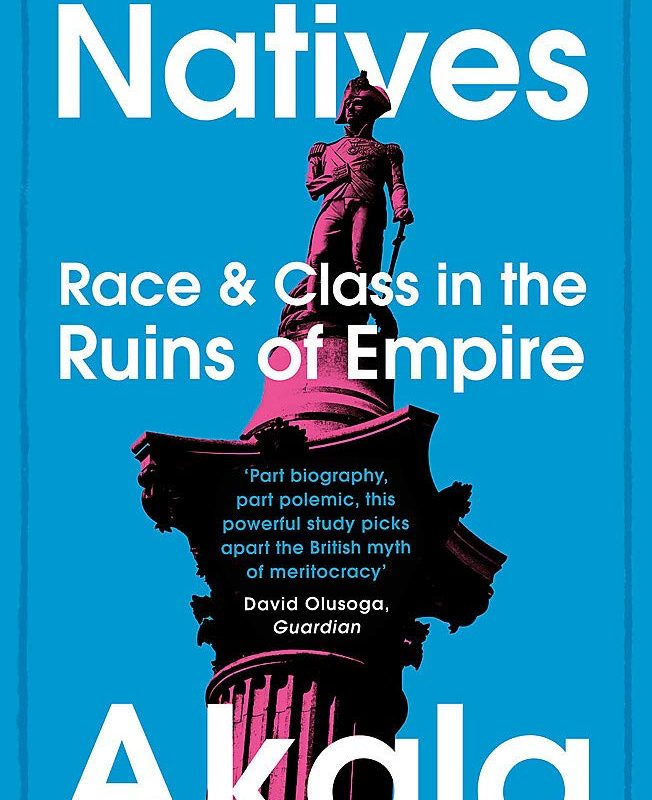 Essay extract from ‘Natives: Autobiography and Anti-Racism After Empire’

For the historian of Black Britain, David Olusoga, Akala’s Natives is not “an easy book to categorise”: “It has been described as a polemic, which in certain respects it is,” he observes, “but it is also a form of biography, a work more interestingly and experimentally structured than any out-and-out polemic.” To explain this structure, Olusoga settles on The Autobiography of Malcolm X as an illuminating point of comparison. For Natives is simultaneously an astonishingly detailed history of Britain’s imperial history, a searing indictment of its institutional racism, and an autobiography of its author to date.

Natives begins as any life story might: “I was born in the 1980s and I grew up in the clichéd, single-parent working-class family” (1). Though ostensibly centring his personal autobiography, Akala’s emphasis on the “typicality” of his upbringing allows him to pivot between the experiential and the political, the private and the public, a dual movement best epitomised in his own self-naming as Akala. On the one hand, the author and narrator, Akala, guides us through meticulously critiques of Britain’s institutional racism, and embeds these within the much larger structural contours of empire using lengthy sections of revisionist history-writing. On the other, the book’s protagonist, Kingslee Daley (Akala’s off-stage name) encounters prejudiced school teachers, instances of street violence and gang-related crime, and a pernicious and racist police force. Embodying this duality as a writer, Akala builds outwards from his autobiographical world to show readers how centuries of racist policy making from across the Empire continue to impinge upon the individual life of a young black boy in Britain today.

Akala’s is a purposeful genre-meshing book. From his radical histories of slave rebellions to his in-depth anthropological studies of black British youth, he draws on existing traditions of academic writing. He even cites some scholarly work directly in the body of his text. And yet he remains sharply attuned to – and is sometimes quite scathing of – the limitations of academic writing and practice: “PhDs and scriptwriters will come to the hood to drain your wisdom for their ethnographic research, as will journalists next time there is a riot. They will have careers, you will get a job. Wash, rinse, repeat” (199). The implied “you” in this comment is especially revealing. It indicates that Akala intends his book primarily for young black men like himself. Natives claims cultural, political, and intellectual territory for its black readers. White readers are welcome to listen and learn from his experience, but this book is emphatically not written for them.

In his work Akala implicitly and explicitly raises the question of whether an overwhelmingly white academy is able to produce effective anti-racist writing. It is not that he devalues academic research, but rather that he is sceptical of its tendency towards abstraction. As he writes, for many people “the postcolonial condition” is not a theoretical problem. Something as simple as Akala’s “experiences in school” can only be properly understood by taking a vast “backdrop of history” into account (246). In the chapter of Natives entitled “The Ku Klux Klan also stopped crime by killing black people”, Akala cites official Department for Education statistics to illustrate the institutional racism embedded in Britain’s education system. The chapter title is taken from a racist comment made to him by one of his school teachers. By combining this single aggression with other anecdotes and comprehensive statistical data, Akala shows how institutional racism impacts upon individual lives, and, in turn, how black experience can help us understand institutional racism. “In this national context and against this backdrop of history my experiences in school start to make complete sense”, writes Akala, “not as isolated incidents with a few bad apples but rather as systemic problems” (245). Importantly, Akala emphasizes that statistics or theories alone will never reveal the systemic reach of British racism. As he argues, it is in the end his “individual experience” that breathes life into “all those graphs and lines” (246).

In this way, Akala’s work self-consciously builds a worldview from and around his own identity and that of his implied black British readers. He creates a grounded anti-racism that connects sometimes over-academic critiques of institutional racism to the real-world experiences of black people in Britain. His anti-racism comes through in his clear directions and aims, as is reflected in his writing.

Since Natives was released in 2018, Akala has toured venues across the UK to give talks and interviews promoting the book. Living in London, I attended one of the Hackney nights of Akala’s tour, hosted at EartH (Evolutionary Arts Hackney) on the Stoke Newington Road. After a characteristically articulate interview, Akala invited members of the audience to form long queues down the left and righthand side aisles of the auditorium. When audience members reached the stage, they were allowed to ask Akala a question. This was a radically democratic forum, allowing anyone who wanted to speak the opportunity to do so (this second half of the event went on for over an hour). There were a number of moving and insightful exchanges, but the most powerful contributions were made by a series of black British mothers who had accompanied their sons to the event.

Respectful of their individual experiences, and refusing quick or simplistic answers, Akala’s anti-racist work that evening was to build social and political connections between the individual life experiences gathered in the room. He transformed a book reading into something resembling the pan-African Saturday School he himself had attended as a young boy. Before community centres were closed by funding cuts to local councils in the 2010s, this school was a space where people could speak about their experiences and, as importantly, where other people listened. In this way, Akala moved beyond just “writing”, instead using his far-reaching historical research to bind together the lived experiences of a local community into something that looked – briefly – like an anti-racist world.

This excerpt is from the forthcoming book chapter: Dominic Davies, “Beyond Experience: The Rise of Anti-Racist Non-Fiction in Britain”, in Josh Doble, Liam Liburd, and Emma Parker eds., British Culture After Empire: Migration, Race, and Decolonisation, 1945-Present (Manchester: Manchester University Press, 2021). Reproduced with the permission of the editors.

Dominic Davies is Senior Lecturer in English at City, University of London.