Born in London to Sikh Punjabi immigrants, Daljit Nagra (1966– ) studied for a BA and MA in English at Royal Holloway, London. He cites William Blake’s Songs of Innocence and Experience as being the work that awoke him to ‘the power of poetry’, which propelled him throughout school. However, he did not have the confidence to pursue writing until he was 30. Nagra draws influence from both his British and Punjabi identities in order to explore how they collide and coincide, particularly focusing on his own experience as a child of first-generation immigrants. Even so, he emphasizes that poets should not be reduced to their backgrounds.

[Nagra’s poems] do that rare thing in poetry of stretching language, making it do things it hasn’t done before. It’s multiculturalism at its most complex, individual and real. 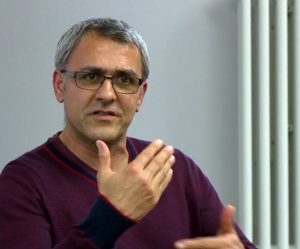 Nagra’s acclaimed collection Look We Have Coming to Dover! (2007), won awards such as the Forward Prize and the Guardian First Book Award. In this work, he explores vastly different attitudes to culture and ethnicity within a small migrant community, achieved partly by merging two languages to create ‘Punglish’ in order to ‘marry two different cultures and two different languages’.

Nagra’s most recent work, British Museum (2017) is also a testament to this hybridity, as he injects the anthology with elements of British Sikh heritage through references to the BBC, Hadrian’s Wall, and British gurdwaras. As well as including more personal poems concerning his upbringing in a traditional community, Nagra’s political meditations in this work consider the idea of national identity in the wake of mass migration, the Arab Spring, and the threat of extremism on British soil. His other works include Tippoo Sultan’s Incredible White-Man-Eating Tiger Toy-Machine!!! (2011) and Ramayana (2013), both of which were shortlisted for the T. S. Eliot Prize. Nagra teaches at Brunel University London, and he is currently Poet in Residence at BBC Radio 4 and 4 Extra, the latter which inspires him to ‘write new poetry which speaks of our complicated age’.