Close reading of By the Sea

Latif Mahmud sat leaning back, his gaunt face tight in a grimace of fortitude, his lips pressed together and widened into the beginning of a grotesque smile. He did not know, I suppose, whether to snarl at me for my story of his father’s inadequacy or to smile like a worldly man who could not fail to find our domestic squabbles paltry, and could not find my efforts to exculpate myself anything but contemptible. The room was now in the lingering dusk of an English summer evening, a light which at first made me anxious and irresolute but which I was learning to tolerate. I was learning to resist drawing the curtains and flooding the room with light, just so as to expel the gloom of that slow leaden onset of night. I thought I should rise and make some more tea, put the light on in the kitchen, break the grip of the silence in which we had been sitting then for a few minutes. But as soon as I stirred, Latif Mahmud uncrossed his legs and leaned forward. I waited for him to speak, but he said nothing, and after a moment he sighed and leaned back again, I rose carefully, so that I should not stumble in my weariness and let him think me feeble, and went to the kitchen. I put the light on and avoided glancing at the cadaverous shadow of a man reflected in the window-panes, avoided the hard-edged sourness which lingered on that face all the time, which lingered there like a deep failing that subterfuge could not disguise. I drew the curtains with my face turned away, and then stood staring into the sink, trembling uncontrollably, feeble after all, overcome by memories which never seem to dim, overcome with pity for myself and for so many others who had been too feeble after all to resist the puniness and raggedness of our souls. So many deaths, and then so many more deaths and mutilations to come, memories I have no power to resist and which come and go to a pattern I cannot anticipate. I don’t know how long I stood there, perhaps a moment too long. Perhaps I made a noise. In any case I heard Latif Mahmud stir in the other room, and stirred myself to fill the kettle and rinse the cups for our tea. I heard him appear in the kitchen, felt him in that small space, and when I turned to him I saw that his eyes were large and luminous, glistening with hurt. He looked straight at me and I dropped my eyes, afraid of what he was now going to say, weary of the bitter recriminations that had worn down my life.

Saleh Omar, a Zanzibari refugee living in an unnamed British village ‘by the sea’, is the unreliable narrator of this section whose dealings with a Persian trader years ago in Zanzibar have led to an enmity with Latif Mahmud, now a respected poet and lecturer at the University of London. In this chapter they meet again for the first time in years. Ironically, Saleh has used Latif’s father’s name as his own in his application for asylum in England. Saleh narrates and explains the circumstances of their falling-out over Saleh’s possession of Latif’s family home, which Saleh came by due to the transference of a debt Latif’s father owed to the dishonest trader, Hussein. 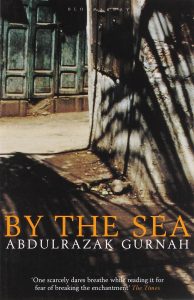 The interconnection of the two men’s lives is central to the novel’s plot, and this moment is the tipping point in which Saleh waits for Latif’s judgment on him and his story. The entangled nature of memory and history, misunderstanding, and shame are crucial thematic concerns throughout the novel and are best captured in this moment of uncertainty. Saleh, now an elderly man, stands trembling at the sink in his small English kitchen, ‘overcome by memories which never seem to dim, overcome with pity for myself and for so many others who had been too feeble after all to resist the puniness and raggedness of our souls’ (193). Here Gurnah is not preoccupied with colonialism or empire, but rather with capturing Saleh’s somewhat melodramatic musings on the inadequacies of the human spirit.

Broadly commenting on writing by Muslims living in or writing about England, Claire Chambers notes that ‘A key feature of the body of what may be controversially termed “Muslim writing” in Britain is that writers are often not overly concerned with (neo)-colonialism and “the West”, but rather with establishing connections and filiations which go beyond this’ (2015, 220). By the Sea is no exception. True to Gurnah’s rejection of reductionist notions of migrancy, Muslims and East Africa, By the Sea deals far more with the mistakenly-produced enmity between the two men than it does with Saleh’s precarity as an asylum-seeker. Though the novel opens with Saleh’s arrival in England as an asylum-seeker and his interactions with his assigned social worker, Rachel, most of the text follows the two men’s conflicting narratives of their lives in Zanzibar and their eventual negotiation of a tenuous friendship based somewhat precariously on ethnicity and their shared history, which is resolved in this section.

Chambers observes that ‘Gurnah frequently wrongfoots the reader, subverting his or her expectations of the narrative’s likely shape’ (2011, 116). This section of the novel brings this unexpected narrative shape into focus, charting Saleh’s musings on the dying light of the unfamiliar English dusk alongside the resolution of a decades-old grudge held by Latif. Saleh feels the urge to illuminate the room following the telling of his story, to expel ‘a light which at first made me anxious and irresolute but which I was learning to tolerate’ (192). He is used to Zanzibari sunsets; the ‘slow leaden onset of night’ (192) in England seems to capture not only his anxiety about being in a foreign place, but the advance of age and infirmity as well. Latif treats the older man with kindness by acknowledging his mistake in blaming Saleh for the loss of his family home, and Saleh is grateful for the ‘respite’ the other man affords him.

If By the Sea is an ‘examination of how history and memory intertwine and interfere with each other’ (Hand, 2010, 77), this section encapsulates the resolution of that interference, while still sustaining the ambiguities of the two men’s positions in one another’s lives, and in English society.