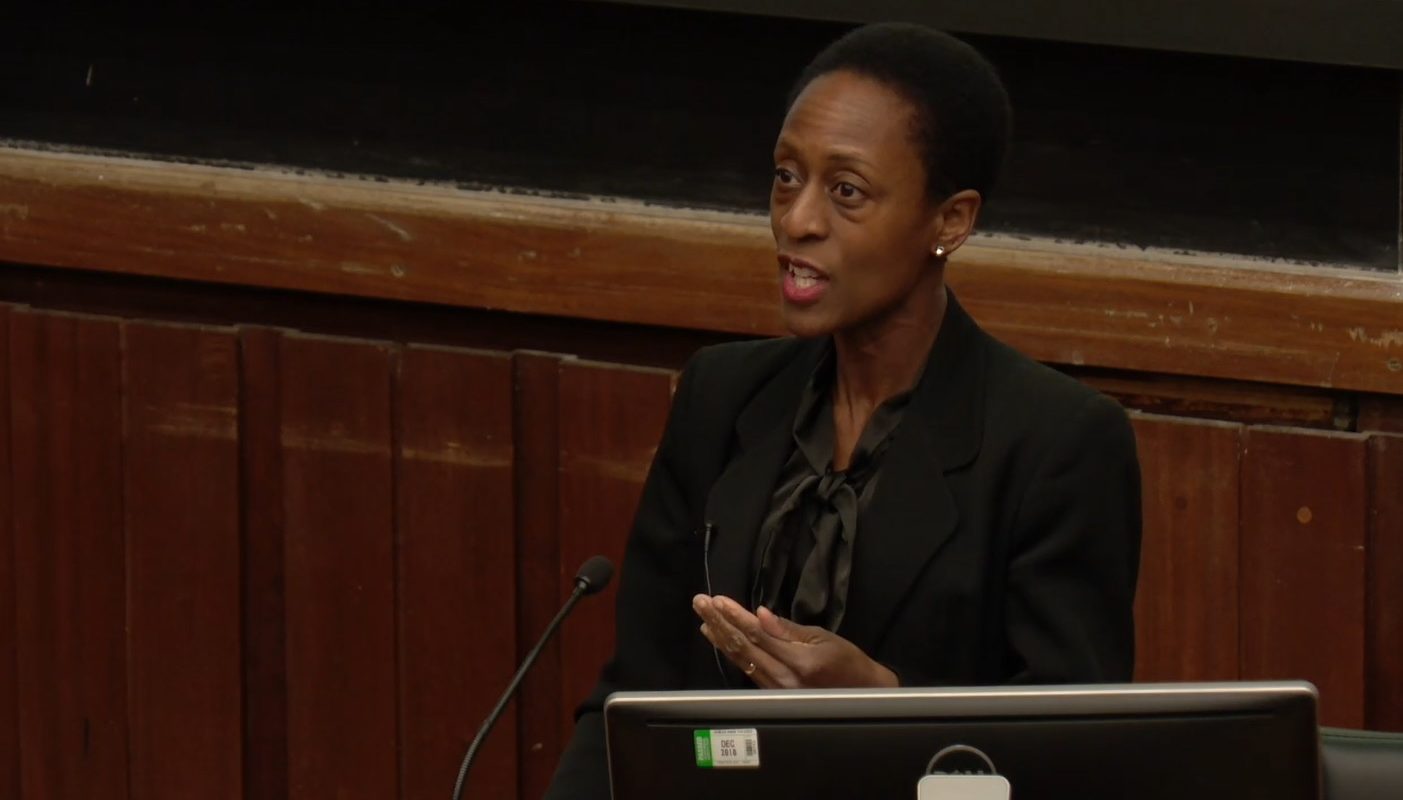 No Beautiful Poems about Violence

Patience Agbabi’s reading from her work at a Writers Make Worlds event in the Oxford English Faculty on 5 December 2019 shook audience preconceptions of what poetry can do and the boundaries it can cross. The Canterbury Poet Laureate’s grime-inspired remixes of medieval poetry shaped by Chaucer’s legacy boldly confronted the realities of cross-border and transnational movement in the twenty-first century.

In the discussion with Elleke Boehmer and Marion Turner that followed the reading, Agbabi explored how she revises the medieval poet’s work through mixing it with the grime, sex, and identity politics of the late 1990s and early 2000s as well as elements of poetry performance. Throughout her student and graduate days, she had performed her work across London literary and poetry circuits, and the experience has animated her work ever since.

As Agbabi told the audience, the first origin of the Telling Tales project was an assignment she completed on Chaucer during her A-levels. She then went on to read English at Oxford as a young woman, and so became even more familiar with Chaucerian form and content. Yet the medieval poet’s work, rather than removing her from difficult contemporary realities, in fact allowed her to confront them and to mould her poetry to reflect dilemmas of identity and belonging.

Agbabi’s attention to form is paramount in her creative process, as she outlined, underlining her attraction to forms such as the sonnet. ‘I like form, so I didn’t run away from that. I felt qualified to take the verse forms by the horns and play around them,’ Agbabi explained, describing her attention to rhyme and the choice of diction. Yet her forms like her subject matter do not falsely impose measure or pattern. As she said in response to a question from Elleke Boehmer, ‘I can’t write beautiful poems about violence’.

To illustrate, in the poem, ‘The Wife of Bafa’, Agbabi reworks Chaucer’s ‘The Wife of Bath’ in such a way as to explore aspects of Agbabi’s own Nigerian heritage, which she is proud to insert into this modern version of the medieval tale, with contemporary and colloquial touches.

My name is Mrs Alice Ebi Bafa.
I come from Nigeria.
I’m very fine, isn’t it.
My next birthday I’ll be… twenty-nine.
I’m business woman.
Would you like to buy some cloth?
I’ve all the latest styles from Lagos,
Italian shoe and handbag to match,
lace, linen and Dutch wax.
I only buy the best
and I travel first class.

As we see cuttingly demonstrated here, Agbabi’s poems also frequently voice the experiences of other people; she draws on her heritage as well as the stories of others to give voice to the core ideas conveyed in the poems.

In the discussion Marion Turner remarked on the formal innovation of Agbabi’s contribution to the first Refugee Tales collection (2016), an anthology born of the desire to counteract prevailing narratives about refugees being held in detention in the UK. Writers including Ali Smith and Abdulrazak Gurnah as well as Agbabi contributed to the collection following walks and conversation with refugees, and articulated their experiences through semi-fictionalised creative outputs. How was Agbabi’s poetic contribution an attempt to articulate experience through form? Turner wondered. ‘There is something particular that poetry can do – the distillation of language, the form, the poetry that takes us back to the oral tradition, it stays most in people’s minds,’ Agbabi responded. As this suggests, the poet draws on original narrative traditions to hone her impact on the reader.

Having made the transition from poetry to prose in the last two years, Agbabi ended by speaking about her upcoming first novel, The Infinite, which will be the first in a series for secondary school-age readers about an autistic girl of colour. True to form, while articulating various experiences through different voices in her poetic work, she had worked hard to find and faithfully represent the voice of a young autistic person. ‘As a writer you cease to be yourself. You have to surrender yourself to the character,’ she said.