Courttia Newland is a novelist and playwright, born in 1973 in London to parents of West Indian heritage. After initially working in music, Newland published his first novel, The Scholar, in 1997. He has since written several more novels, as well as editing multiple anthologies and publishing two of his own short story collections. In 2007 he was shortlisted for an award from the Crime Writers’ Association and nominated in 2011 for the Frank O’Connor Award. As a playwright, he was shortlisted for the Alfred Fagan Award in 2010.  He is also an associate lecturer in Creative Writing at the University of Westminster.

Having read all my life and found it a great source of pleasure, one thing had always bothered me – I never saw myself reflected in the pages of anything I read. This prompted me to write my first book and has kept me inspired to date! Telling untold stories keeps me alive. 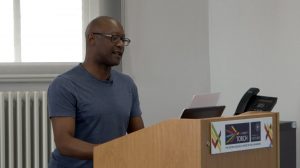 Newland’s early novels depict community and family life on London housing estates. The Scholar (1997) and Society Within (1999), both set in Greenside Estate in West London, use realism to portray contemporary life in the city for his young black protagonists. Newland represents with authenticity the experiences and style of speech of young people through dialect and slang, which Newland also uses to represent Caribbean patois in later short stories.

Originally aspiring to be a rapper, Newland released a drum and bass record before becoming an author. As a writer, this influence is felt in the infusion of music into many of his narratives. A Book of Blues (2011), a collection of short stories with a wide breadth of distinct voices and perspectives, is partly inspired by the sounds and emotional power of blues music. Music is used in this collection to invoke settings from the Miami club scene to the hip hop craze of London in 1988, while also providing the blues motifs of love and loneliness that he explores in this collection.

While Newland is concerned with exploring Black British culture in his writing, his work shows a diverse interest in genre that defies a single categorisation of him as an author. Newland has most recently examined maternal loss in The Gospel According to Cane (2013), after publishing the detective thriller Snakeskin (2002) and exploring the macabre in Music for the Off-Key (2006). Newland’s experimentation with form and genre has sometimes conflicted with the critical pigeonholing of his writing:

As someone first published for my council-estate tales of crime and poverty, I’ve always viewed the contrast between industry acceptance of my early work and the lack of interest in work that doesn’t conform to black working-class stereotypes an affront to my free speech.